A consistent hierarchy of generalized kinetic equation approximations to the master equation applied to surface catalysis. 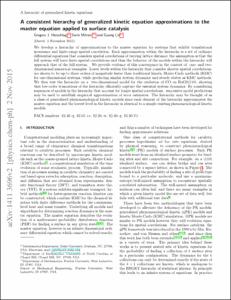 View / Download
1.0 Mb
Date
Authors
Herschlag, Gregory J
Mitran, Sorin
Lin, Guang
Repository Usage Stats
232
views
174
downloads
Abstract
We develop a hierarchy of approximations to the master equation for systems that exhibit translational invariance and finite-range spatial correlation. Each approximation within the hierarchy is a set of ordinary differential equations that considers spatial correlations of varying lattice distance; the assumption is that the full system will have finite spatial correlations and thus the behavior of the models within the hierarchy will approach that of the full system. We provide evidence of this convergence in the context of one- and two-dimensional numerical examples. Lower levels within the hierarchy that consider shorter spatial correlations are shown to be up to three orders of magnitude faster than traditional kinetic Monte Carlo methods (KMC) for one-dimensional systems, while predicting similar system dynamics and steady states as KMC methods. We then test the hierarchy on a two-dimensional model for the oxidation of CO on RuO2(110), showing that low-order truncations of the hierarchy efficiently capture the essential system dynamics. By considering sequences of models in the hierarchy that account for longer spatial correlations, successive model predictions may be used to establish empirical approximation of error estimates. The hierarchy may be thought of as a class of generalized phenomenological kinetic models since each element of the hierarchy approximates the master equation and the lowest level in the hierarchy is identical to a simple existing phenomenological kinetic models.
Type
Journal article
Permalink
https://hdl.handle.net/10161/12397
Published Version (Please cite this version)
10.1063/1.4922515
Publication Info
Herschlag, Gregory J; Mitran, Sorin; & Lin, Guang (2015). A consistent hierarchy of generalized kinetic equation approximations to the master equation applied to surface catalysis. J Chem Phys, 142(23). pp. 234703. 10.1063/1.4922515. Retrieved from https://hdl.handle.net/10161/12397.
This is constructed from limited available data and may be imprecise. To cite this article, please review & use the official citation provided by the journal.
Collections
More Info
Show full item record Phillip Griffiths Assistant Research Professor
I am interested in studying techniques to understand fairness in redistricting.  I am also interested in computational fluid dynamics and high-performance computing.