Mothers but not wives: The increasing lag between nonmarital births and marriage 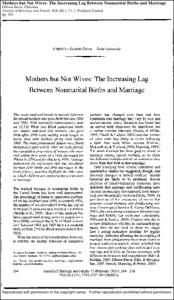 View / Download
2.6 Mb
Date
Author
Gibson Davis, CM
Repository Usage Stats
61
views
222
downloads
Abstract
This study analyzed trends in marital behavior for unwed mothers who gave birth between 1960 and 2004. With nationally representative data on 15,353 White and Black unmarried mothers, results indicated that mothers who gave birth after 1989 were waiting much longer to marry than were mothers giving birth before 1968. The most pronounced delays were found immediately after a birth. Over the study period, the cumulative proportion of women who married within three years of a birth decreased for Whites by 27% and for Blacks by 60%. Findings underscore the separation that has developed between first births and first marriages in the United States, and they highlight the older ages at which children are experiencing a transition to marriage. © National Council on Family Relations, 2011.
Type
Journal article
Permalink
https://hdl.handle.net/10161/12437
Published Version (Please cite this version)
10.1111/j.1741-3737.2010.00803.x
Publication Info
Gibson Davis, CM (2011). Mothers but not wives: The increasing lag between nonmarital births and marriage. Journal of Marriage and Family, 73(1). pp. 264-278. 10.1111/j.1741-3737.2010.00803.x. Retrieved from https://hdl.handle.net/10161/12437.
This is constructed from limited available data and may be imprecise. To cite this article, please review & use the official citation provided by the journal.
Collections
More Info
Show full item record