"Cabaret Identity: How Best to Play a Jew or Pass as a Gentile in Wartime Poland" 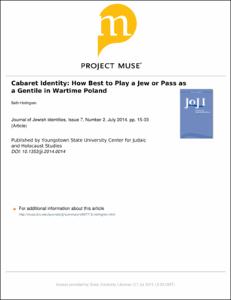 Professor of Polish and Russian Studies
Beth Holmgren, Professor of Polish Studies and Russian Studies, has published widely on Polish literature, theater, popular culture, and film; Russian literature, film, and women's studies; and Russian and Polish artists and performers in the North American diaspora. Her scholarship and work in the field have won multiple national awards. Recent scholarship focuses on Polish Jewish cultural history of the interwar period, Polish film from the 1930s until the current day, and 21st-century Polish