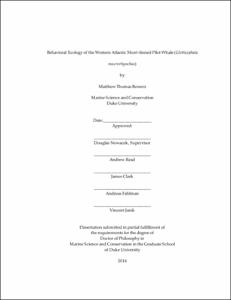 Social structure is a key determinant of population biology and is central to the way animals exploit their environment. The risk of predation is often invoked as an important factor influencing the evolution of social structure in cetaceans and other mammals, but little direct information is available about how cetaceans actually respond to predators or other perceived threats. The playback of sounds to an animal is a powerful tool for assessing behavioral responses to predators, but quantifying behavioral responses to playback experiments requires baseline knowledge of normal behavioral patterns and variation. The central goal of my dissertation is to describe baseline foraging behavior for the western Atlantic short-finnned pilot whales (Globicephala macrohynchus) and examine the role of social organization in their response to predators. To accomplish this I used multi-sensor digital acoustic tags (DTAGs), satellite-linked time-depth recorders (SLTDR), and playback experiments to study foraging behavior and behavioral response to predators in pilot whales. Fine scale foraging strategies and population level patterns were identified by estimating the body size and examining the location and movement around feeding events using data collected with DTAGs deployed on 40 pilot whales in summers of 2008-2014 off the coast of Cape Hatteras, North Carolina. Pilot whales were found to forage throughout the water column and performed feeding buzzes at depths ranging from 29-1176 meters. The results indicated potential habitat segregation in foraging depth in short-finned pilot whales with larger individuals foraging on average at deeper depths. Calculated aerobic dive limit for large adult males was approximately 6 minutes longer than that of females and likely facilitated the difference in foraging depth. Furthermore, the buzz frequency and speed around feeding attempts indicate this population pilot whales are likely targeting multiple small prey items. Using these results, I built decision trees to inform foraging dive classification in coarse, long-term dive data collected with SLTDRs deployed on 6 pilot whales in the summers of 2014 and 2015 in the same area off the coast of North Carolina. I used these long term foraging records to compare diurnal foraging rates and depths, as well as classify bouts with a maximum likelihood method, and evaluate behavioral aerobic dive limits (ADLB) through examination of dive durations and inter-dive intervals. Dive duration was the best predictor of foraging, with dives >400.6 seconds classified as foraging, and a 96% classification accuracy. There were no diurnal patterns in foraging depth or rates and average duration of bouts was 2.94 hours with maximum bout durations lasting up to 14 hours. The results indicated that pilot whales forage in relatively long bouts and the ADLB indicate that pilot whales rarely, if ever exceed their aerobic limits. To evaluate the response to predators I used controlled playback experiments to examine the behavioral responses of 10 of the tagged short-finned pilot whales off Cape Hatteras, North Carolina and 4 Risso’s dolphins (Grampus griseus) off Southern California to the calls of mammal-eating killer whales (MEK). Both species responded to a subset of MEK calls with increased movement, swim speed and increased cohesion of the focal groups, but the two species exhibited different directional movement and vocal responses. Pilot whales increased their call rate and approached the sound source, but Risso’s dolphins exhibited no change in their vocal behavior and moved in a rapid, directed manner away from the source. Thus, at least to a sub-set of mammal-eating killer whale calls, these two study species reacted in a manner that is consistent with their patterns of social organization. Pilot whales, which live in relatively permanent groups bound by strong social bonds, responded in a manner that built on their high levels of social cohesion. In contrast, Risso’s dolphins exhibited an exaggerated flight response and moved rapidly away from the sound source. The fact that both species responded strongly to a select number of MEK calls, suggests that structural features of signals play critical contextual roles in the probability of response to potential threats in odontocete cetaceans.