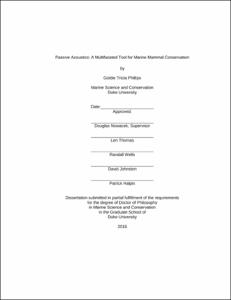 Marine mammals exploit the efficiency of sound propagation in the marine environment for essential activities like communication and navigation. For this reason, passive acoustics has particularly high potential for marine mammal studies, especially those aimed at population management and conservation. Despite the rapid realization of this potential through a growing number of studies, much crucial information remains unknown or poorly understood. This research attempts to address two key knowledge gaps, using the well-studied bottlenose dolphin (Tursiops truncatus) as a model species, and underwater acoustic recordings collected on four fixed autonomous sensors deployed at multiple locations in Sarasota Bay, Florida, between September 2012 and August 2013. Underwater noise can hinder dolphin communication. The ability of these animals to overcome this obstacle was examined using recorded noise and dolphin whistles. I found that bottlenose dolphins are able to compensate for increased noise in their environment using a wide range of strategies employed in a singular fashion or in various combinations, depending on the frequency content of the noise, noise source, and time of day. These strategies include modifying whistle frequency characteristics, increasing whistle duration, and increasing whistle redundancy. Recordings were also used to evaluate the performance of six recently developed passive acoustic abundance estimation methods, by comparing their results to the true abundance of animals, obtained via a census conducted within the same area and time period. The methods employed were broadly divided into two categories – those involving direct counts of animals, and those involving counts of cues (signature whistles). The animal-based methods were traditional capture-recapture, spatially explicit capture-recapture (SECR), and an approach that blends the “snapshot” method and mark-recapture distance sampling, referred to here as (SMRDS). The cue-based methods were conventional distance sampling (CDS), an acoustic modeling approach involving the use of the passive sonar equation, and SECR. In the latter approach, detection probability was modelled as a function of sound transmission loss, rather than the Euclidean distance typically used. Of these methods, while SMRDS produced the most accurate estimate, SECR demonstrated the greatest potential for broad applicability to other species and locations, with minimal to no auxiliary data, such as distance from sound source to detector(s), which is often difficult to obtain. This was especially true when this method was compared to traditional capture-recapture results, which greatly underestimated abundance, despite attempts to account for major unmodelled heterogeneity. Furthermore, the incorporation of non-Euclidean distance significantly improved model accuracy. The acoustic modelling approach performed similarly to CDS, but both methods also strongly underestimated abundance. In particular, CDS proved to be inefficient. This approach requires at least 3 sensors for localization at a single point. It was also difficult to obtain accurate distances, and the sample size was greatly reduced by the failure to detect some whistles on all three recorders. As a result, this approach is not recommended for marine mammal abundance estimation when few recorders are available, or in high sound attenuation environments with relatively low sample sizes. It is hoped that these results lead to more informed management decisions, and therefore, more effective species conservation.