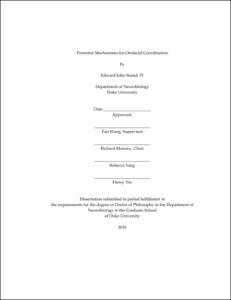 The mouth, throat, and face contain numerous muscles that participate in a large variety of orofacial behaviors. The jaw and tongue can move independently, and thus require a high degree of coordination among the muscles that move them to prevent self-injury. However, different orofacial behaviors require distinct patterns of coordination between these muscles. The method through which motor control circuitry might coordinate this activity has yet to be determined. Electrophysiological, immunohistochemical, and retrograde tracing studies have attempted to identify populations of premotor neurons which directly send information to orofacial motoneurons in an effort to identify sources of coordination. Yet these studies have not provided a complete picture of the population of neurons which monosynaptically connect to jaw and tongue motoneurons. Additionally, while many of these studies have suggested that premotor neurons projecting to multiple motor pools may play a role in coordination of orofacial muscles, no clear functional roles for these neurons in the coordination of natural orofacial movements has been identified.

In this dissertation, I took advantage of the recently developed monosynaptic rabies virus to trace the premotor circuits for the jaw-closing masseter muscle and tongue-protruding genioglossus muscle in the neonatal mouse, uncovering novel premotor inputs in the brainstem. Furthermore, these studies identified a set of neurons which form boutons onto motor neurons in multiple motor pools, providing a premotor substrate for orofacial coordination. I then combined a retrogradely traveling lentivirus with a split-intein mediated split-Cre recombinase system to isolate and manipulate a population of neurons which project to both left and right jaw-closing motor nuclei. I found that these bilaterally projecting neurons also innervate multiple other orofacial motor nuclei, premotor regions, and midbrain regions implicated in motor control. I anatomically and physiologically characterized these neurons and used optogenetic and chemicogenetic approaches to assess their role in natural jaw-closing behavior, specifically with reference to bilateral masseter muscle electromyogram (EMG) activity. These studies identified a population of bilaterally projecting neurons in the supratrigeminal nucleus as essential for maintenance of an appropriate level of masseter activation during natural chewing behavior in the freely moving mouse. Moreover, these studies uncovered two distinct roles of supratrigeminal bilaterally projecting neurons in bilaterally synchronized activation of masseter muscles, and active balancing of bilateral masseter muscle tone against an excitatory input. Together, these studies identify neurons which project to multiple motor nuclei as a mechanism by which the brain coordinates orofacial muscles during natural behavior.