Defining the Role of the Histone Methyltransferase, PR-Set7, in Maintaining the Genome Integrity of Drosophila Melanogaster 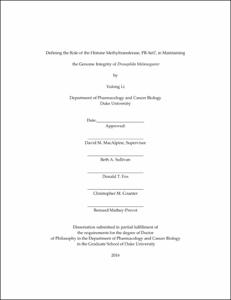 The complete and faithful duplication of the genome is essential to ensure normal cell division and organismal development. Eukaryotic DNA replication is initiated at multiple sites termed origins of replication that are activated at different time through S phase. The replication timing program is regulated by the S-phase checkpoint, which signals and repairs replicative stress. Eukaryotic DNA is packaged with histones into chromatin, thus DNA-templated processes including replication are modulated by the local chromatin environment such as post-translational modifications (PTMs) of histones.

One such epigenetic mark, methylation of lysine 20 on histone H4 (H4K20), has been linked to chromatin compaction, transcription, DNA repair and DNA replication. H4K20 can be mono-, di- and tri-methylated. Monomethylation of H4K20 (H4K20me1) is mediated by the cell cycle-regulated histone methyltransferase PR-Set7 and subsequent di-/tri- methylation is catalyzed by Suv4-20. Prior studies have shown that PR-Set7 depletion in mammalian cells results in defective S phase progression and the accumulation of DNA damage, which may be partially attributed to defects in origin selection and activation. Meanwhile, overexpression of mammalian PR-Set7 recruits components of pre-Replication Complex (pre-RC) onto chromatin and licenses replication origins for re-replication. However, these studies were limited to only a handful of mammalian origins, and it remains unclear how PR-Set7 impacts the replication program on a genomic scale. Finally, the methylation substrates of PR-Set7 include both histone (H4K20) and non-histone targets, therefore it is necessary to directly test the role of H4K20 methylation in PR-Set7 regulated phenotypes.

I employed genetic, cytological, and genomic approaches to better understand the role of H4K20 methylation in regulating DNA replication and genome stability in Drosophila melanogaster cells. Depletion of Drosophila PR-Set7 by RNAi in cultured Kc167 cells led to an ATR-dependent cell cycle arrest with near 4N DNA content and the accumulation of DNA damage, indicating a defect in completing S phase. The cells were arrested at the second S phase following PR-Set7 downregulation, suggesting that it was an epigenetic effect that coupled to the dilution of histone modification over multiple cell cycles. To directly test the role of H4K20 methylation in regulating genome integrity, I collaborated with the Duronio Lab and observed spontaneous DNA damage on the imaginal wing discs of third instar mutant larvae that had an alanine substitution on H4K20 (H4K20A) thus unable to be methylated, confirming that H4K20 is a bona fide target of PR-Set7 in maintaining genome integrity.

One possible source of DNA damage due to loss of PR-Set7 is reduced origin activity. I used BrdU-seq to profile the genome-wide origin activation pattern. However, I found that deregulation of H4K20 methylation states by manipulating the H4K20 methyltransferases PR-Set7 and Suv4-20 had no impact on origin activation throughout the genome. I then mapped the genomic distribution of DNA damage upon PR-Set7 depletion. Surprisingly, ChIP-seq of the DNA damage marker γ-H2A.v located the DNA damage to late replicating euchromatic regions of the Drosophila genome, and the strength of γ-H2A.v signal was uniformly distributed and spanned the entire late replication domain, implying stochastic replication fork collapse within late replicating regions. Together these data suggest that PR-Set7-mediated monomethylation of H4K20 is critical for maintaining the genomic integrity of late replicating domains, presumably via stabilization of late replicating forks.

In addition to investigating the function of H4K20me, I also used immunofluorescence to characterize the cell cycle regulated chromatin loading of Mcm2-7 complex, the DNA helicase that licenses replication origins, using H4K20me1 level as a proxy for cell cycle stages. In parallel with chromatin spindown data by Powell et al. (Powell et al. 2015), we showed a continuous loading of Mcm2-7 during G1 and a progressive removal from chromatin through S phase.