Aneuploidy Tolerance in a Polyploid Organ 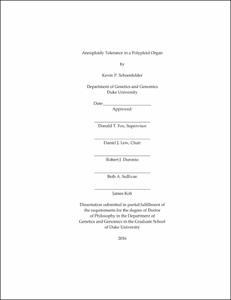 Endopolyploid cells (hereafter - polyploid cells), which contain whole genome duplications in an otherwise diploid organism, play vital roles in development and physiology of diverse organs such as our heart and liver. Polyploidy is also observed with high frequency in many tumors, and division of such cells frequently creates aneuploidy (chromosomal imbalances), a hallmark of cancer. Despite its frequent occurrence and association with aneuploidy, little is known about the specific role that polyploidy plays in diverse contexts. Using a new model tissue, the Drosophila rectal papilla, we sought to uncover connections between polyploidy and aneuploidy during organ development. Our lab previously discovered that the papillar cells of the Drosophila hindgut undergo developmentally programmed polyploid cell divisions, and that these polyploid cell divisions are highly error-prone. Time-lapse studies of polyploid mitosis revealed that the papillar cells undergo a high percentage of tripolar anaphase, which causes extreme aneuploidy. Despite this massive chromosome imbalance, we found the tripolar daughter cells are viable and support normal organ development and function, suggesting acquiring extra genome sets enables a cell to tolerate the genomic alterations incurred by aneuploidy. We further extended these findings by seeking mechanisms by which the papillar cells tolerated this resultant aneuploidy.