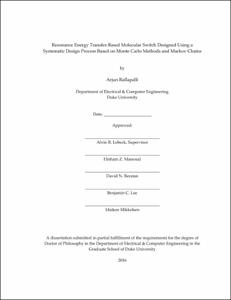 A RET network consists of a network of photo-active molecules called chromophores that can participate in inter-molecular energy transfer called resonance energy transfer (RET). RET networks are used in a variety of applications including cryptographic devices, storage systems, light harvesting complexes, biological sensors, and molecular rulers. In this dissertation, we focus on creating a RET device called closed-diffusive exciton valve (C-DEV) in which the input to output transfer function is controlled by an external energy source, similar to a semiconductor transistor like the MOSFET. Due to their biocompatibility, molecular devices like the C-DEVs can be used to introduce computing power in biological, organic, and aqueous environments such as living cells. Furthermore, the underlying physics in RET devices are stochastic in nature, making them suitable for stochastic computing in which true random distribution generation is critical.

In order to determine a valid configuration of chromophores for the C-DEV, we developed a systematic process based on user-guided design space pruning techniques and built-in simulation tools. We show that our C-DEV is 15x better than C-DEVs designed using ad hoc methods that rely on limited data from prior experiments. We also show ways in which the C-DEV can be improved further and how different varieties of C-DEVs can be combined to form more complex logic circuits. Moreover, the systematic design process can be used to search for valid chromophore network configurations for a variety of RET applications.

We also describe a feasibility study for a technique used to control the orientation of chromophores attached to DNA. Being able to control the orientation can expand the design space for RET networks because it provides another parameter to tune their collective behavior. While results showed limited control over orientation, the analysis required the development of a mathematical model that can be used to determine the distribution of dipoles in a given sample of chromophore constructs. The model can be used to evaluate the feasibility of other potential orientation control techniques.