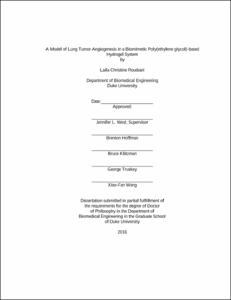 Tumor angiogenesis is critical to tumor growth and metastasis, yet much is unknown about the role vascular cells play in the tumor microenvironment. A major outstanding challenge associated with studying tumor angiogenesis is that existing preclinical models are limited in their recapitulation of in vivo cellular organization in 3D. This disparity highlights the need for better approaches to study the dynamic interplay of relevant cells and signaling molecules as they are organized in the tumor microenvironment. In this thesis, we combined 3D culture of lung adenocarcinoma cells with adjacent 3D microvascular cell culture in 2-layer cell-adhesive, proteolytically-degradable poly(ethylene glycol) (PEG)-based hydrogels to study tumor angiogenesis and the impacts of neovascularization on tumor cell behavior.

Overall, this dissertation demonstrates the development of a novel 3D tumor angiogenesis model that was used to study vascular cell-cancer cell interactions in lung adenocarcinoma cell lines with varying metastatic capacities. Findings in this thesis have helped to elucidate the role of vascular cells in tumor progression and have identified differences in cancer cell behavior in vitro that correlate to metastatic capacity, thus highlighting the usefulness of this model platform for future discovery of novel tumor angiogenesis and tumor progression-promoting targets.