Observations and Simulations of the Western United States' Hydroclimate 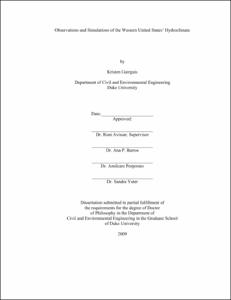 While very important from an economical and societal point of view, estimating precipitation in the western United States remains an unsolved and challenging problem. This is due to difficulties in observing and modeling precipitation in complex terrain. This research examines this issue by (i) providing a systematic evaluation of precipitation observations to quantify data uncertainty and (ii) investigating the ability of the Ocean-Land-Atmosphere Model (OLAM) to simulate the winter hydroclimate in this region. This state-of-the-art, non-hydrostatic model has the capability of simulating simultaneously all scales of motions at various resolutions.

Long-range weather forecasts on the order of a season are important for water-scarce regions such as the western U.S. The modeling component of this research looks at the ability of the OLAM to simulate the hydroclimate in the western U.S. during the winter of 1999. Six global simulations are run, each with a different spatial resolution over the western U.S. (360 km down to 11 km). For this study, OLAM is configured as for a long-range seasonal hindcast but with observed sea surface temperatures. OLAM precipitation compares well against observations, and is generally within the range of data uncertainty. Observed and simulated synoptic meteorological conditions are examined during the wettest and driest events. OLAM is shown to reproduce the appropriate anomaly fields, which is encouraging since it demonstrates the capability of a global climate model, driven only by SSTs and initial conditions, to represent meteorological features associated with daily precipitation variability.