Interactions of Mast Cells with the Lymphatic System: Delivery of Peripheral Signals to Lymph Nodes by Mast Cell-Derived Particles 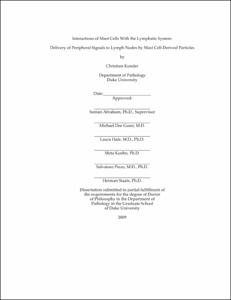 Mast cells, best known for their pathologic role in allergy, have recently been shown to have key roles in the initiation of adaptive immune responses. These cells are located throughout the body just beneath barriers separating host from environment, possess multiple pathogen recognition systems, and store large quantities of fully active inflammatory mediators. These key features make them uniquely situated to act as sentinels of immunity, releasing the very earliest alarm signals when a pathogen is present. As a testament to the importance of these cells, mast cell-deficient mice have suboptimal immune responses, and mast cell activators can act as potent adjuvants for experimental immunizations. Specifically, mast cells have been shown to enhance the number of naive lymphocytes in infection site-draining lymph nodes, and to encourage the migration of dendritic cells to responding lymph nodes.

Although infections usually occur at peripheral sites, adaptive immune responses are initiated in distant lymph nodes. Despite the distance, signals from the site of infection result in dramatic, rapid reorganization of the node, including massive recruitment of naive lymphocytes from the circulation and extensive vascular restructuring to accommodate the increase in size. How such signals reach the lymph node is not well understood.

When mast cells degranulate, in addition to releasing soluble mediators such as histamine, they expel large, stable, insoluble particles composed primarily of heparin and cationic proteins. The work presented herein demonstrates that these particles act as extracellular chaperones for inflammatory mediators, protecting them from dilution into the interstitial space, degradation, and interaction with non-target host cells and molecules. The data show clearly that mast cells release such particles, that they are highly stable, that they contain tumor necrosis factor (a critically important immunomodulator), and that they can traffic from peripheral sites to draining lymph nodes via lymphatic vessels. Furthermore, extensive biochemical characterization of purified mast cell-derived particles was performed. Finally, evidence is presented that such particles can elicit lymph node enlargement, an infection-associated phenomenon that favors the development of adaptive immunity, by delivering peripheral TNF to draining lymph nodes.

This signaling concept, that particles may chaperone signals between distant sites, also has important implications for adjuvant design. The evidence presented here shows that encapsulation of TNF into synthetic particles similar to mast cell-derived particles greatly enhances its potency for eliciting lymph node enlargement, an indication that adaptive immunity may be improved. This delivery system should ensure that more adjuvant arrives in the draining lymph node intact, where it would lead to changes favorable to the development of the immune response. Such a system would also facilitate the delivery of multi-component adjuvants that would act synergistically at the level of the lymph node when gradually released from microparticle carriers. An additional advantage of microparticle encapsulation is that vaccine formulations of this type may require much lower doses of expensive antigen and adjuvants.

The delivery of inflammatory mediators to lymph nodes during immune responses may be an important general feature of host defense. Although the action of mediators of peripheral origin on draining lymph nodes has been described before, this is the first demonstration of a specific adaptation to deliver such mediators. Not only is the characterization of mast cell-derived particles important to basic immunology, but mimicking this adaptation may also lead to improved therapeutics.