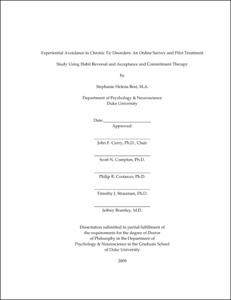 Among some researchers, there is an emerging conceptualization of chronic tic disorders (CTDs) as conditions that are partially rooted in avoidance of tic-related private experiences (i.e., painful or difficult thoughts and feelings) and internal sensations (i.e., premonitory urges to tic). The first specific aim of the present research was to investigate the possibility that experiential avoidance is related to tic severity and perceived quality of life in individuals with CTDs. The second aim was to determine whether the efficacy of Habit Reversal Training (HRT), the most prevalent and effective behavioral intervention for CTDs to date, might be enhanced by combining it with Acceptance and Commitment Therapy (ACT), an intervention that directly targets experiential avoidance. These aims were addressed by conducting two related studies. Study I, an online survey, included 239 adults (<italic>M</italic> = 37.6 years; <italic>SD</italic> = 13.8 years) who reported having been previously diagnosed with a CTD. Results showed that levels of premonitory urges, as well as both general and tic-specific experiential avoidance, were significantly positively related to tic severity. General and tic-specific experiential avoidance were also significantly negatively related to perceived quality of life. Psychometric analyses of two novel measures developed for Study I (i.e., the Yale Global Tic Severity Scale-Self-Report Version and the Acceptance and Action Questionnaire-Tic-Specific Version) demonstrated excellent internal consistency and convergent validity. Study II, a multi-site pilot investigation, involved 13 adolescents (<italic>M</italic> = 15.4 years; <italic>SD</italic> = 1.3 years) who were treated with either HRT alone or a novel HRT+ACT intervention. Results suggest that the HRT+ACT treatment is feasible, highly acceptable to both patients and parents, and as effective as HRT alone at reducing tic severity from pre-treatment through week 22 follow-up. Participants in both groups reported clinically significant post-treatment decreases in general and tic-specific experiential avoidance and improvements in overall functioning. Researchers concluded that experiential avoidance plays an important role in tic expression and overall functioning for individuals with CTDs. Results support additional development and testing of the promising HRT+ACT intervention, to evaluate its efficacy alone and in comparison to other relevant psychosocial and pharmacological interventions.