Implicit, Eclipsed, but Functional: the Development of Orthographic Knowledge in Early Readers 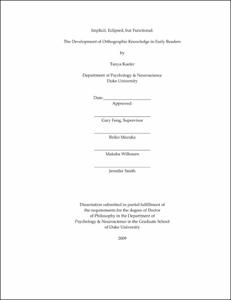 In study 2, children's creative spellings were used to gauge children's implicit knowledge of letter patterns in a naturalistic setting. We find that kindergarteners in particular tend to rely on phonology over orthography when the two are in conflict. This supports the hypothesis that phonological knowledge can mask orthographic knowledge.

In study 3, children were asked to decode non-words and their implicit knowledge of letter patterns was measured using eye tracking. I found that early readers show some implicit knowledge when decoding, This supports the hypothesis that generalized orthographic knowledge can be measured in literacy tasks under certain testing conditions.