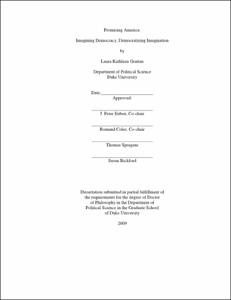 This project elucidates the politics of imagination in the United States and interrogates the conditions of democratic imagination in particular. I evaluate the role of imagination in political theory and in United States history, contextualizing my theoretical arguments through analyses of the Revolution and Founding and through a case study of the Populist movement of the late 19th century. I treat imagination as a productive and representative social power that is constituted in relation to the everyday terrain on which subjects, discourses, and material realities are formed and practiced. Imagination plays a paradoxical role in the history of political theory: it is a fundamental condition of political community, and yet it has the potential to transgress any given configuration of political order. Democratic theorists commonly respond to this paradox by moving to one side of it. Those concerned with democratic stability and belonging seek to ground imagination in some incontestable cultural authority; those concerned with democratic dynamism and freedom take the power of imagination to be illimitable. Constructing a conversation between Pierre Bourdieu, Michael Bakhtin, Hannah Arendt, and Populism, I argue that freedom requires attending to the everyday tensions between the stabilizing and dynamic powers of imagination. Contemporary mergers of capitalism, technology, and administrative power centralize political imagination by incorporating, concealing, or destroying competing cultural forms and practices. For the promise of freedom to survive, and at times even flourish, it is thus crucial to cultivate dynamic traditions, institutions, practices, and dispositions that can harbor emergent imaginings of democracy.