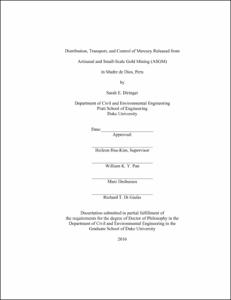 Mercury (Hg) is a globally circulating heavy metal released through both natural and anthropogenic sources. The largest anthropogenic source of mercury to the global atmosphere is artisanal and small-scale gold mining (ASGM). During the ASGM process, miners add elemental mercury to large quantities of sediment or soil in order to create gold-mercury amalgams that separate alluvial gold from the remaining geological host material. Miners then heat the amalgam using a blowtorch or similar device to separate the mercury and gold, exposing themselves to mercury vapor and releasing mercury to the environment. Following amalgam heating, mercury can deposit into aquatic ecosystems. There, anaerobic microorganisms can convert mercury to methylmercury (MeHg), a potent neurotoxin that rapidly accumulates in aquatic food webs. A high concentration of MeHg in fish poses serious human health risks, especially to pregnant women and children.

In Peru’s Region of Madre de Dios (MDD), mercury use for ASGM is widespread due to increasing global demand for gold. This region in the tropical Amazon is one of the world’s most biodiverse ecosystems and home to more than 150,000 Indigenous and non-Indigenous people, 40% of whom live below the poverty level. Recently, people living in the region have become more aware of negative impacts of Hg pollution through popular press. However, there is lack of controlled scientific studies to examine the environmental impacts of Hg from ASGM and subsequent exposures to surrounding communities.

This dissertation addresses four questions in order to better understand how mercury from ASGM impacts environmental health in Madre de Dios: (1) How is mercury distributed along the Madre de Dios River in areas of active ASGM activity, and what is the risk for mercury exposure to downstream communities? (2) How does land use change associated with ASGM activity affect soil-mediated mercury transport in the Colorado River, Madre de Dios, Peru? (3) Can sulfurized carbon be manufactured in a feasible way for developing countries and used to capture mercury during ASGM amalgam burning? (4) What is the mercury methylation potential of easy-to-manufacture spent, sulfurized carbon sorbents?

Despite significant information on the direct health impacts of mercury to ASGM miners, the impact of mercury contamination on downstream communities has not been well characterized, particularly in Madre de Dios. In this area, ASGM has increased significantly since 2000 and has led to substantial political and social controversy. The second chapter of this dissertation examines the spatial distribution and transport of mercury through the Madre de Dios River with distance from ASGM activity. It also characterizes risks for dietary mercury exposure to local residents who depend on fish from the river. River sediment, suspended solids from the water column, and fish samples were collected in 2013 at 62 sites near 17 communities over a 560 km stretch of the Madre de Dios River and its major tributaries. In areas downstream of know ASGM activity, mercury concentrations in sediment, suspended solids and fish within the Madre de Dios River were elevated relative to locations upstream of mining. Fish tissue mercury concentrations were observed at levels representing a public health threat, with greater than one-third of carnivorous fish exceeding the international health standard of 0.5 mg/kg. This research demonstrates that communities located hundreds of kilometers downstream of ASGM activity, including children and indigenous populations who may not be involved in mining, are at risk of dietary mercury exposure that exceed acceptable body burdens.

This research involved extensive field sampling in an active mining region and indicated suspended particulate transport may be an important source of mercury from mining areas to downstream communities. Chapter three of this research focused on understanding how land use changes can influence soil and sediment transport from mining regions. Within the MDD, a large portion of mining in concentrated within the Colorado River watershed. In the Colorado River watershed, mining and deforestation have increased dramatically since the 1980s, largely concentrated in the Puquiri subwatershed. Field sampling in Feb 2015 identified a strong correlation between Hg and suspended solids concentrations, with especially high suspended solids concentrations downstream of ASGM activity. This supported the hypothesis that Mercury transport in this region is facilitated by soil mobilization and runoff. In order to understand how ASGM activity in the Puquiri affects sediment mobilization from the watershed over time, we employed a watershed-scale soil mobilization model using satellite imagery from 1986 to 2014. The model estimated that soil mobilization in the Colorado River watershed increased by 2.5 times during the time period, and increased by six times in the Puquiri subwatershed, leading to between 10 and 60 kg of mercury mobilized in 2014. If deforestation continues at its current exponential rate through 2030, soil and heavy metal mobilization may increase by five times. This research shows that deforestation associated with ASGM in the Colorado River watershed can exacerbate soil mobilization and mercury contamination. While the impacts of mercury and deforestation are often considered separately, here we studied how deforestation associated with ASGM in the Madre de Dios region can significantly increase soil mobilization and mercury transport to downstream communities.

In Chapter 5 of this research, the sulfurized sorbents were examined further to understand methylation potential in sediment slurries. Anaerobic sediment slurries were constructed to examine methylmercury (MeHg) production of spent sorbents. Five sorbent types with approximately 10 mg/kg Hg each were added to slurries at 5 % by mass. Dissolved mercury was used as a control to simulate atmospheric deposition or highly reactive mercury. After a 5 d incubation at room temperature, MeHg production was ten times greater with low-technology sulfurized sorbents as compared to activated carbon or biochar alone. Sulfurized sorbents leached significantly more mercury than their non-sulfurized counterparts during desorption experiments and led to greater dissolved mercury concentrations. This research shows that low-cost mercury-contaminated sorbents can have unintended consequences with increased MeHg production and potential for more harm to local communities than atmospheric release.

Mercury releases from ASGM are expected to grow, leading to higher concentrations of mercury in the atmosphere that may affect ecosystems throughout the globe. Understanding the importance of mercury from ASGM to toxicity and accumulation requires in depth research on mercury transformations and MeHg production associated with ASGM. This research examines mercury distribution and transport from ASGM active regions. It identifies that deforestation, erosion, and particulate transport play important roles in overall mercury transport, leading to hazardous mercury concentrations downstream of ASGM activity. Effective point-of-use mercury capture technologies would dramatically decrease the mass of mercury released to the environment. The final chapters of this research serve as a proof of concept for using sulfurized activated carbon for mercury capture in developing countries.

Our research team has built strong relationships with several governmental and non-governmental organizations in Peru who will aid in distributing information. This research will provide invaluable environmental health information to residents, inform political intervention, and reveal a new potential avenue for low-cost mercury control.