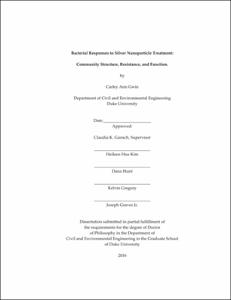 The antimicrobial properties of silver have been taken advantage of by societies for thousands of years. Its use has come back in favor in the form of silver nanoparticles, which are highly efficacious antimicrobial agents. Silver nanoparticles are incorporated into a myriad of products specifically designed for clinical use, but also for general use by consumers. Silver nanoparticles can be found in textiles such as clothing and stuffed toys, and in home appliances including washing machines and curling irons. A large number of products specifically marketed for use by children are also available to consumers, including pacifiers, sippy cups, and even breast milk storage bags. The hazards and toxicities associated with silver nanoparticles are not well understood, however modes of toxicity have been reported for ionic silver. It is assumed that the main mechanism of toxicity of silver nanoparticles relates to the release of ionic silver, however studies have indicated an additional nano-effect, likely due to nanoparticle size, differential coatings, and means of sustained dosing of ionic silver. However we are sure that these silver nanoparticles will accumulate in the waste stream, likely arriving during different stages of a product’s lifespan. A main sink of these nanoparticles travelling through both natural and engineered environments is wastewater treatment plants. As a society we rely on the biological removal of nutrients, which takes place primarily in the activated sludge of secondary treatment. Studies have already indicated possible, temporary decreases in removal efficiencies as well as changes in microbial communities, including losses of diversity, following exposure to silver nanoparticles. Therefore, it is of paramount importance to examine the effects of both silver nanoparticles and ionic silver on the community and function of wastewater bacteria.

Sequencing batch reactors were operated to mimic wastewater treatment. They were fed synthetic wastewater and after reaching acclimation, were dosed over time with varying concentrations of both ionic and nanosilver. Cell samples were collected periodically to assess the presence and identity of cultivable silver resistant bacteria and to map the microbial community changes taking place under different treatments using Next Generation Sequencing. Isolates were tested for the presence of known silver resistance (sil) genes as were activated sludge samples from a collection of domestic wastewater treatment plants, by designing TaqMan probe assays and performing quantitative PCR. The silver resistant isolates were also used to test the growth implications, as well as sil gene expression changes, following treatment with ionic silver and a variety of silver nanoparticles with various coatings, all at multiple concentrations. This was accomplished by performing multiple batch experiments and then using the TaqMan assays and reverse transcription-quantitative PCR.

Overall, microbial community changes were observed in the sequencing batch reactors, and there were differences noted based on treatment, including ionic silver versus nanosilver and between the two silver nanoparticle coatings. Most notably, the possibility of nitrification in wastewater treatment being particularly susceptible was strongly indicated. Individual wastewater bacteria isolates all contained sil genes, as did the majority of the wastewater treatment plant activated sludge, however the levels of actual sil gene expression were inconsistent. This particular finding supports a current body of work indicating that there are alternate modes of bacterial silver resistance in play that we are just becoming aware of.