The Role of Acetylation in the Metabolic Reprogramming of Cancer Cells 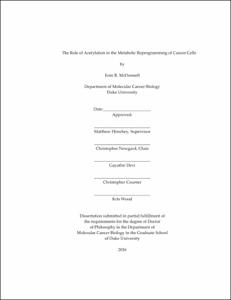 Identifying metabolic vulnerabilities of cancer cells remains a subject of investigation for the identification of potential metabolically based therapies for cancer. It is well known that proliferating cells become largely dependent on glucose and glutamine for their growth. Interestingly, we find that lipid oxidizing genes are consistently downregulated across a wide variety of cancers while lipid synthesizing genes are elevated. This indicates that lipid oxidation may be refractory to cancer cell growth. Studies have shown beneficial effects of carbohydrate restriction in various forms in the treatment of cancer. For example, the use of ketogenic diets, which contain high levels of fat and protein with very low levels of carbohydrates, have shown efficacy in decreasing tumor growth in glioma, colon, prostate, and gastric cancers. A major challenge facing the use of these diets in cancer therapy is that the mechanism by which they show efficacy in cancer remains unclear. By using octanoate, the most well-known ketogenic fatty acid, we are able to drive fatty acid oxidation and ketogenesis to study these processes in proliferating cells. We found that supplementation of octanoate into complete culture medium causes a dramatic, dose-dependent and reversible suppression of proliferation across numerous cell lines and significant changes to anabolic cellular metabolism. Importantly, we have found that ketone production from octanoate had no effect on cell proliferation but that the overall cellular response to the lipid causes inhibition of cell growth.

Nutrients and metabolites are sensed by the cell at many levels and the cellular response to metabolites is critical to proliferation and survival of a cancer cell. One way in which the cell responds to glucose, the major fuel source in cancer cells, is by increasing histone acetylation to promote gene expression. Wellen et al., found that upon glucose addition there was a specific gene expression pattern characterized by the upregulation of genes involved in glucose metabolism. In this way the cell promotes glucose-derived fatty acid synthesis, a rate-limiting process for cancer cell proliferation. This is one way in which the metabolic response to nutrients is integrated into cellular signaling and the epigenome. Remarkably, we have found that lipids can promote a feed-forward mechanism of lipid metabolism by inducing histone acetylation and increasing gene expression of lipid metabolizing genes. We find that upon treatment of cells with octanoate there is an inhibition of both glucose and glutamine metabolism and that octanoate-derived carbon becomes the major fuel source in the cell. We then found that histones were hyperacetylated after octanoate treatment and remarkably, close to 90% of the carbon on histones was octanoate derived. In addition, octanoate is a weak HDAC inhibitor which further promotes octanoate-derived acetyl-CoA being deposited onto histones. A gene array from octanoate treated samples finds that fatty acid metabolism is the top pathway in our gene ontology analysis. This provides evidence that the cell responds to nutrient sources in a specific manner depending on the nature of the carbon source. Finally, we find the most negatively regulated pathway upon octanoate treatment is DNA replication. Consistently, we find that octanoate causes an accumulation of cells in G1 phase of the cell cycle and induction of apoptosis.

Here we describe a mechanism for how fatty acids are sensed and how they communicate with the nucleus to alter gene expression. We show that the cell responds to lipids via a coordinated response to promote lipid metabolism and induce histone acetylation. This feed-forward mechanism of lipid metabolism consists of a reprograming of anabolic metabolism, and promotion of gene expression changes culminating in inhibition of cell growth and apoptosis.