Magnitude and Mechanisms of Unforced Variability in Global Surface Temperature 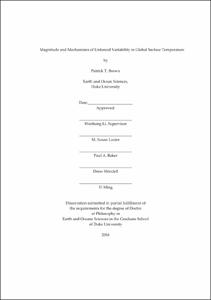 Global mean surface air temperature (GMST) is one of the most well-known and robust measures of global climate change both contemporarily as well as through deep time. In contemporary climate science, the most often discussed causes of GMST change are referred to as external radiative forcings, which are considered to be exogenous to the land-atmosphere-ocean system and which impose a radiative energy imbalance (N) at the top of the earth’s atmosphere. Examples of external radiative forcings include changes in well-mixed greenhouse gas concentrations, changes in volcanic or anthropogenic aerosol loading, anthropogenic changes in land use, and changes in incoming solar radiation. The climate system can also produce unforced variability in GMST that spontaneously emerges from the internal dynamics of the land-atmosphere-ocean system. Unforced GMST variability can emerge via a vertical redistribution of heat within the climate system. For example, there can be a net transport of energy from below the ocean’s mixed layer to the surface during an El-Niño event. Additionally, unforced GMST variability can be due to an unforced change in N. For example, an internally generated change in the strength of an ocean circulation could alter the extent of sea ice and thus change the Earth’s albedo.

Understanding the magnitude and mechanisms underlying unforced GMST variability is relevant for both the attribution of past climate change to various causes, as well to the prediction of future changes on policy-relevant timescales. However, the literature on unforced GMST variability, particularly at interdecadal and longer timescales, is inconsistent and there is significant disagreement on its magnitude, on its primary geographic origins, and on the physical mechanisms that are most responsible.

This work has yielded six primary conclusions: I) Dynamics over the tropical Pacific Ocean represent the primary contributor to unforced GMST variability at interdecadal and longer timescales with lesser contributions from dynamics in the subpolar north Atlantic and Southern Ocean. II) AOGCMs tend to underestimate the magnitude of unforced GMST variability at interdecadal and longer timescales relative to both instrumental and reconstructed surface temperature datasets. III) N imbalances can act to significantly enhance interdecadal GMST variability. IV) GMST is able to restore equilibrium after an internally generated perturbation via the transport of energy to high-latitude locations and via the rearrangement the atmospheric circulation; both of which allow for much more efficient release of outgoing longwave radiation (OLR) than would otherwise be expected. V) N imbalances can significantly enhance internal modes of variability such as the AMO; and VI) The magnitude of interdecadal GMST variability is likely to decline and the generating mechanisms of such variability may be fundamentally altered as climate warms over the 21st century. These results advance our understanding of unforced GMST variability and they have implications for attribution studies and may inform projections of climate change on interdecadal timescales.