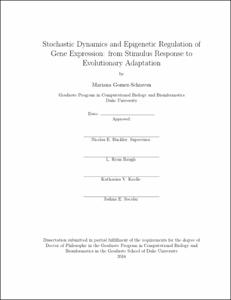 How organisms adapt and survive in continuously fluctuating environments is a central question of evolutionary biology. Additionally, organisms have to deal with the inherent stochasticity in all cellular processes. The purpose of this thesis is to gain insights into how organisms can use epigenetics and the stochasticity of gene expression to deal with a fluctuating environment. To accomplish this, two cases at different temporal and structural scales were explored: (1) the early transcriptional response to an environmental stimulus in single cells, and (2) the evolutionary dynamics of a population adapting to a recurring fluctuating environment. Mathematical models of stochastic gene expression, population dynamics, and evolution were developed to explore these systems.

First, the information available in sparse single cell measurements was analyzed to better characterize the intrinsic stochasticity of gene expression regulation. A mathematical and statistical model was developed to characterize the kinetics of a single cell, single gene behavior in response to a single environmental stimulus. Bayesian inference approach was used to deduce the contribution of multiple gene promoter states on the experimentally measured cell-to-cell variability. The developed algorithm robustly estimated the kinetic parameters describing the early gene expression dynamics in response a stimulus in single neurons, even when the experimental samples were small and sparse. Additionally, this algorithm allowed testing and comparing different biological hypotheses, and can potentially be applied to a variety of systems.