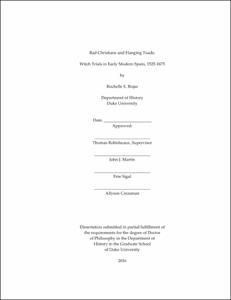 This dissertation challenges depictions of witchcraft as a sensational or disruptive phenomenon, presenting witch beliefs instead as organically woven into everyday community life, religious beliefs, and village culture. It argues that witch beliefs were adaptive, normal, and rational in regions that never suffered convulsive witch persecutions. Furthermore, this dissertation, the first to work systematically through Spanish secular court witch trials, upends scholars’ views about the dominance of the Spanish Inquisition in witchcraft prosecutions. Through a serial study of secular court records, this dissertation reveals that the local court of Navarra poached dozens of witch trials from the Spanish Inquisition, and independently prosecuted over one hundred accused witches over one hundred-and-fifty years. These overlooked local sources document witch beliefs in far greater detail than Inquisition records and allow the first reconstruction of village-level witch beliefs in Spain. Drawing from historical, anthropological, and literary methods, this dissertation employs a transdisciplinary approach to examine the reports from villagers, parish priests, and jurists, produced under the specific local and older accusatorial judicial procedure. Free of the Inquisitorial filter that has dominated previous studies of Spanish witchcraft, these sources reveal the way villagers—not Inquisitors—conceived of, created, feared, and survived in a world with witches and sorceresses.

Using these local sources, this dissertation illuminates the complex social webs of witchcraft accusations, the pathways of village gossip, and the inner logic of witch beliefs. It reveals the central role of Catholic performativity and the grave consequences of being marked as a mala cristiana, the importance of fama and kin ties, and reveals the rationality of the curious and pervasive presence of the common toad (Bufo bufo) in Navarra’s witch trials. By moving away from the prevalent focus given to the more spectacular witch panics and trials, this work demonstrates the value of local trial records. This dissertation argues that far from irrational or absurd, witchcraft beliefs in early modern Navarra were internally coherent and intellectually informed by an amalgamation of religious, social, and legal forces.