Who's Minding the Story? The United Church of Canada Meets A Secular Age 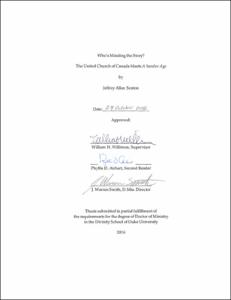 In the tumultuous 1960s, under the pressure of significant cultural forces, the United Church of Canada made a pivot from a stance of trying to influence, change, or direct the culture of the society around it to a stance of “listening to the world” instead. The decision to listen to the world was based on a particular reading of the process of secularization, as expressed in the secular theology espoused by John A.T. Robinson, Harvey Cox, and others, and popularized by writers such as Pierre Berton. This standard reading of the process of secularization sees it as inevitable and inexorable, the natural outcome of humanity’s coming of age in the modern era. Secularity is seen as a neutral state, what remains after the superstition of religion is finally eradicated. The thesis demonstrates that this view of secularization continues to be influential in the United Church of Canada, and that it underlies two current proposals for the future of the denomination: that of John Pentland, who makes the argument for a closer connection between church and secular culture; and that of Gretta Vosper, an atheist who argues for a post-theistic future for the denomination.

But what if the standard secularization theory just described is wrong? What if the foundations on which it rests are called into question by an alternative reading of the evidence? Canadian philosopher Charles Taylor, in his recent work A Secular Age, offers just such an alternative reading. Taylor suggests that the standard narrative of secularization reflects modern biases that distort some of the evidence and argues for an enduring symbiotic relationship between religious practice and modernity. In particular, Taylor makes a compelling case for religious communities to maintain a stance of openness towards transcendence and not to allow themselves to be trapped within what he names “the immanent frame.” The thesis draws on Taylor’s work to discern four themes that encapsulate significant parts of his revised understanding of secularization. These themes are then applied to the proposals of Pentland and Vosper. This critical analysis demonstrates that both proposals draw heavily on the standard secularization theory and fail to take account of the significant insights in Taylor’s revised reading of secularization. Both proposals remain within the immanent frame with an inadequate account of transcendence. Specifically, neither proposal makes a clear affirmation of the divinity of Jesus. The thesis concludes with a call for the United Church of Canada to recover a connection to its pre-1960s traditions, while retaining the best of its liberal and progressive heritage, in order to provide a more robust Christian witness in a secular age.