State of HIV in the US Deep South. 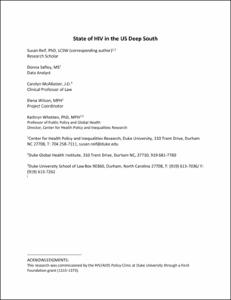 View / Download
618.1 Kb
Date
Authors
Reif, Susan
Safley, Donna
McAllaster, Carolyn
Wilson, Elena
Whetten, Kathryn
Repository Usage Stats
2,477
views
8,526
downloads
Abstract
The Southern United States has been disproportionately affected by HIV diagnoses and mortality. To inform efforts to effectively address HIV in the South, this manuscript synthesizes recent data on HIV epidemiology, care financing, and current research literature on factors that predispose this region to experience a greater impact of HIV. The manuscript focuses on a specific Southern region, the Deep South, which has been particularly affected by HIV. Epidemiologic data from the Centers from Disease Control and Prevention indicate that the Deep South had the highest HIV diagnosis rate and the highest number of individuals diagnosed with HIV (18,087) in 2014. The percentage of new HIV diagnoses that were female has decreased over time (2008-2014) while increasing among minority MSM. The Deep South also had the highest death rates with HIV as an underlying cause of any US region in 2014. Despite higher diagnosis and death rates, the Deep South received less federal government and private foundation funding per person living with HIV than the US overall. Factors that have been identified as contributors to the disproportionate effects of HIV in the Deep South include pervasive HIV-related stigma, poverty, higher levels of sexually transmitted infections, racial inequality and bias, and laws that further HIV-related stigma and fear. Interventions that address and abate the contributors to the spread of HIV disease and the poorer HIV-related outcomes in the Deep South are warranted. Funding inequalities by region must also be examined and addressed to reduce the regional disparities in HIV incidence and mortality.
Type
Journal article
Subject
AIDS
HIV
South
Stigma
Permalink
https://hdl.handle.net/10161/13807
Published Version (Please cite this version)
10.1007/s10900-017-0325-8
Publication Info
Reif, Susan; Safley, Donna; McAllaster, Carolyn; Wilson, Elena; & Whetten, Kathryn (2017). State of HIV in the US Deep South. J Community Health. 10.1007/s10900-017-0325-8. Retrieved from https://hdl.handle.net/10161/13807.
This is constructed from limited available data and may be imprecise. To cite this article, please review & use the official citation provided by the journal.
Collections
More Info
Show full item record Colin W. Brown Clinical Distinguished Professor Emeritus
Carolyn McAllaster is the founder of the Health Justice Clinic, formerly the AIDS/HIV and Cancer Legal Project, directs the HIV/AIDS Policy Clinic, and is a Clinical Professor of Law at Duke. She supervises students in the AIDS/HIV Policy Clinic and teaches a course on AIDS and the Law. McAllaster received her BA in German from the University of North Carolina in Chapel Hill in 1972, and her JD from the UNC Law School in 1976. She began her practice of law in Durham with a litigation Professor in the Sanford School of Public Policy
Director, Center for Health Policy and Inequalities ResearchResearch Director, Hart Fellows Program,Professor, Public Policy and Global Health Professor, Nursing and Community & Family Medicine Kathryn Whetten (PhD) is Chair of the Maternal, Adolescent and Child Health working group, and she is the Co-Chair of the University Diversity Task Force and the Sanford Diversity Committee. Kathryn Whetten is the Principal Investigator on
Alphabetical list of authors with Scholars@Duke profiles.