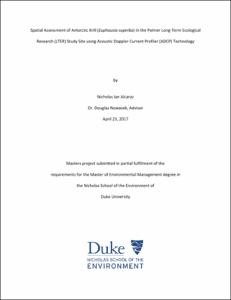 View / Download
2.2 Mb
Date
Author
Alcaraz, Nicholas
Advisor
Nowacek, Douglas
Repository Usage Stats
250
views
294
downloads
Abstract
Antarctic krill (Euphausia superba) play an integral role in the ecological community of the Southern Ocean. Information to monitor biomass and distribution is extremely important to scientists and managers, particularly due to recent warming trends along the Western Antarctic Peninsula. Active acoustic systems provide a robust, reliable method for measuring krill biomass and distribution. The intent of this project was to develop tools and methodologies in MatLab and ArcGIS to assess variations in krill patch size, latitudinal and longitudinal distribution, as well as depth dependent patterns. Pre-processed acoustic Doppler current profiler (ADCP) backscatter data, from one-month cruises over 5 years, were used as a template to produce maps, tables, and graphs. The standardized output products allow for qualitative comparisons across multiple years within the Palmer Long Term Ecological Research (LTER) study site. Eventually, whale satellite-tag data can be cross-referenced to determine if the spatial scale of whale feeding behavior coincides with the krill patch size or location; which is critical to interpreting changes within the ecosystem and the foraging dynamics of predators. The initial section of the report presents an overview of Antarctic krill behavior and life history, regional warming implications, and the history of the LTER and acoustic biomass surveys. Technical information is presented concerning the operation of an ADCP and data processing; ADCP data require correction and calibration for use in biomass backscatter measurement. A literature review of previous studies provides context of current knowledge within the field, and highlights shortcomings that this project will address. Next, the study site and data collection methods are discussed, including the acquisition, processing, and storage of acoustic data. Two datasets used as templates in script development, from Meng Zhou and the Common Ocean Data Access System (CODAS), are described in Data Analysis. The ArcGIS Data Import, ADCP Average and Integration, and User Selection models provide methods to manipulate data on a variety of spatial scales. These tools allow the user to select an area of interest and determine the resolution of the resultant acoustic backscatter data based on the needs of the study. Output tables are then used to create maps and plots of biomass for further analysis in ArcMap and MatLab. The third section discusses qualitative results from five LTER cruises. Histograms of depth-integrated, latitude and longitude, and depth-separated backscatter data provided the basis for comparative analysis within a single year. Large aggregations are found inshore and within protected bays of the local islands surrounding the Western Antarctic Peninsula. As ship transects move offshore and south, size and intensity of acoustic return decreases. Additionally, depth correlated patterns show high backscattering values near the surface, with a slight drop off, and potentially bimodal signal as the signal moves deeper through the water column. Finally, a discussion of the results shows that there is indeed variation in patch size, distribution, and depth dependent patterns across each year based on the ADCP data processed to this point. The backscatter data based at this point on uncorrected, uncalibrated acoustic returns agrees with previous studies, which described retentive patterns that keep krill entrained in local bays during the austral summer. This is in contrast to the eastern Antarctic, in which krill move offshore as summer approaches. Location and depth patterns were not as apparent due to limitations within the dataset that did not allow for precise relative estimates of biomass. These patterns can be illuminated through further investigation into the CODAS data, or the acquisition of post-processed data. Furthermore, by obtaining actual biomass estimates, we can determine if patch size or location is an indicator of whale feeding preference. The tools developed provided an introductory investigation into krill spatiotemporal availability, but also recognized the need for more directed research into the implications of these changes on the ecosystem.
Type
Master's project
Department
Nicholas School of the Environment and Earth Sciences
Subject
ADCP, Antarctic Krill, LTER, Ecology, Tools, Palmer Station
Permalink
https://hdl.handle.net/10161/14070
Citation
Alcaraz, Nicholas (2017). Spatial Assessment of Antarctic Krill (Euphausia superba) in the Palmer Long-Term Ecological Research (LTER) Study Site using Acoustic Doppler Current Profiler (ADCP) Technology. Master's project, Duke University. Retrieved from https://hdl.handle.net/10161/14070.
Collections
More Info
Show full item record