Working on the Inside, Living on the Outside: Migrant Domestic Workers in Jordan 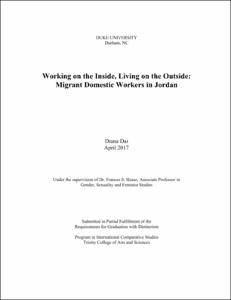 View / Download
9.1 Mb
Date
Author
Dai, Diana
Advisor
Hasso, Frances Susan
Repository Usage Stats
364
views
665
downloads
Abstract
Migrant workers are often seen as the archetypical excluded figure. This image becomes even more vivid and convincing when the worker is identified as woman, non-white, and poor. In response to this excluded figure, public and scholarly discourse has been focused on the language of inclusion and integration, which often implies expanding citizenship, amnesty, legal status, and other forms of juridicial clemency. This thesis pushes against the tendency to see exclusion and inclusion as a natural binary and with clearly demarcated borders. Instead, I argue that spaces and conditions of exclusion and inclusion are contingent upon and subject to state power and dominant discourses. What this means in relation to migrant domestic workers in Jordan is that being “included” -- whether by the law, by the family, by the state -- can often yield ambiguous results. Using the notion of inclusion as a starting point, my thesis investigates the complex dynamics of labor migration in Jordan and the Philippines, the role of both these states in the governance and “inclusion” of migrants/citizens, and the role of capitalist ideology in the exploitation of migrant domestics. I find that, on the one hand, being included into the law, family, or state subjects one to more control, surveillance, and discipline. On the other hand, being “excluded” from the law, family, or state can open up possibilities for more autonomy, choice, and consensual relations.
Type
Honors thesis
Department
International Comparative Studies
Subject
domestic workers middle east migration
Permalink
https://hdl.handle.net/10161/14331
Citation
Dai, Diana (2017). Working on the Inside, Living on the Outside: Migrant Domestic Workers in Jordan. Honors thesis, Duke University. Retrieved from https://hdl.handle.net/10161/14331.
Collections
More Info
Show full item record