Sources, Quality, and Fate of Organic Matter in Deep-Sea Sediments in the Larsen A Embayment, Weddell Sea: Changes by Global Warming and Ice Shelf Melt 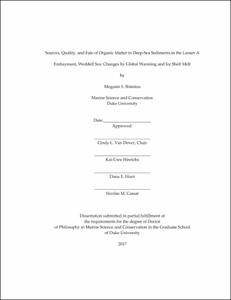 Ice shelf coverage in Antarctica is declining due to recent global warming. The northern part of Larsen Ice Shelf, the Larsen A in the Weddell Sea, has been decreasing since the 19th century and in 2000 finally disappeared. Ice shelf coverage decrease should dramatically enhance biological productivity in surface water and organic matter flux to the seafloor. This dissertation examines sources of organic matter to sediments, indicators of labile organic matter flux increase due to the ice-shelf collapse, and potential subsequent impacts of changing ocean productivity on the sedimentary microbial community in the sediment cores taken across a 170-year chronoseries of ice-shelf loss, five-transect stations. Characterizing lipid biomarkers, phytoplankton (rather than terrestrially derived organic material) was identified as the major source of organic matter in the sediments, as previously found in other nearshore Antarctic regions. The predominance of C16, C18, and C20 fatty acids, 24-methylenecholesterol, sitosterol, and 13C-enriched sea-ice diatom biomarker (C25:2 HBIs) indicate the importance of organic matter inputs from sea-ice diatom communities that become more dominant as the prevalence of sea ice coverage once the ice shelf disappears. Bacterial and Archaeal lipids were second and third largest lipid sources. These lipids could be sourced from the water column and in situ production as well as former ice shelf and ice-rafted debris. Using the vertical lipid distributions, diagenetic models were applied to estimate the pelagic lipid flux before and after the ice shelf collapse. The results suggest that the rapid increase in flux due to the ice shelf disintegration, but further characterization of degradation rates need to be undertaken to increase confidence in the magnitude of this increased flux. Lipid flux increase may induce a shift in the microbial community structure in the sediments. Multivariate analyses identified that the organic matter content and δ13CTOC values, relative abundances of labile and recalcitrant lipid biomarkers, and concentrations of nitrogen species are important factors that correlate with downcore and cross-shelf microbial community composition. Enriched organic matter content (electron donor) may influence the microbial community through the decreased availability of electron acceptors in the sediments. The quality of the organic matter may also influence the microbial community: microbes that use recalcitrant organic matter shift to phytodetritus degraders as more-labile organic matter is delivered to the seabed following ice-shelf collapse. These results will offer a new perspective on the potential impacts of the ice-shelf disintegration to the subseafloor environment. Further investigations are needed to quantify the flux increase and microbial degradation rates of organic matter to expand the knowledge on influences of glacier melt on biogeochemical cycle.