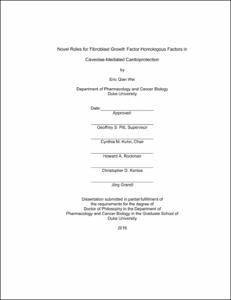 Fibroblast growth factor homologous factors (FHFs) are non-canonical members of the fibroblast growth factor family (FGF11-14) that were initially discovered to bind and regulate neuronal and cardiac voltage-gated Na+ channels. Loss-of-function mutations that disrupt interaction between FHFs and Na+ channels cause spinocerebellar ataxias and cardiac arrhythmias such as Brugada syndrome. Although recent studies in brain of FHF knockout mice suggested novel functions for FHFs beyond ion channel modulation, it is unclear whether FHFs in the heart serve additional roles beyond regulating cardiac excitability. In this study, we performed a proteomic screen to identify novel interacting proteins for FGF13 in mouse heart. Mass spectrometry analysis revealed an interaction between FGF13 and a complex of cavin proteins that regulate caveolae, membrane invaginations that organize protective signaling pathways and provide a reservoir to buffer membrane stress. FGF13 controls the relative distribution of cavin 1 between the plasma membrane and cytosol and thereby acts as a negative regulator of caveolae. In inducible, cardiac-specific Fgf13 knockout mice, cavin 1 redistributed to the plasma membrane and stabilized the caveolar structural protein caveolin 3, leading to an increased density of caveolae. In a transverse aortic constriction model of pressure overload, this increased caveolar abundance enhanced cardioprotective signaling through the caveolar-organized PI3 kinase pathway, preserving cardiac function and reducing fibrosis. Additionally, the increased caveolar reserve provided mechanoprotection, as indicated by reduced membrane rupture in response to hypo-osmotic stress. Thus, our results establish FGF13 as a novel regulator of caveolae-mediated mechanoprotection and adaptive hypertrophic signaling, and suggest that inhibition of FHFs in the adult heart may have cardioprotective benefits in the setting of maladaptive hypertrophy.