The Discovery of EJC Independent Roles for EIF4A3 in Mitosis, Microtubules, and Neural Crest Development 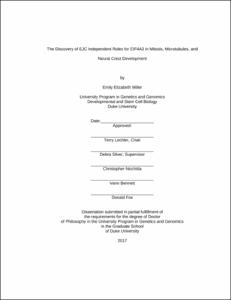 The exon junction complex (EJC) is comprised of three core components: MAGOH, RBM8A, and EIF4A3. The EJC is canonically known to regulate many aspects of RNA metabolism as well as function in mitosis. Previous work on the EJC has primarily focused on functions for the EJC as a complex, and thus independent roles for EJC components are lacking. It was also recently discovered that EIF4A3 is the causative gene in Richieri-Costa-Pereira Syndrome (RCPS), a craniofacial disease primarily characterized by a severely undersized mandible.

We used two systems to examine EIF4A3 function. First, HeLa cells allowed for dissection of EJC complex requirements. We depleted EIF4A3, MAGOH, or RBM8A and saw that MAGOH and RBM8A protein levels are interdependent, while EIF4A3 levels are independent. We next used point mutant constructs that disrupt EJC core formation to assay EJC complex requirements during mitosis. Constructs that disrupt MAGOH-RBM8A from interacting with EIF4A3 were able to rescue prometaphase arrest, suggesting they may regulate mitosis independently. Further, localization studies show that during mitosis MAGOH and RBM8A localize pericentrosomally whereas EIF4A3 is more expanded across microtubules. Biochemistry studies reveal that EIF4A3 is able to bind to microtubules in the absence of other EJC components or RNA. We also found that overexpression of EIF4A3 results in telophase arrest, suggesting that EIF4A3 dosage is important throughout mitosis.

We next used mouse models to examine the developmental requirements of Eif4a3 both ubiquitously and in the neural crest. We show that heterozygous loss of Eif4a3 at early embryonic ages results in disrupted mandibular arch fusion. These defects later manifest as severe craniofacial abnormalities and loss of adult mandibular structures. Examination of the skeletons of these embryos shows premature ossification of the clavicle. Parallel studies in patient-derived iPSCs show that neural crest cells are less able to migrate and when pushed down an osteogenic lineage, they prematurely differentiate into bone. The craniofacial phenotypes seen in Eif4a3 mutant mice are also distinct from other EJC mutants.

From these data we conclude that EIF4A3 has EJC-independent functions in mitosis, microtubule interaction, and neural crest development. Future studies that disentangle EJC-dependent and independent functions will allow for a more thorough understanding of how these proteins work at the molecular level and in human disease.