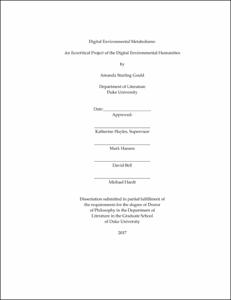 By combining literary, ecocritical, and media techniques with a mindfulness of the environment, “Digital Environmental Metabolisms: An Ecocritical Project of the Digital Environmental Humanities” contributes to the urgent task of re-orienting media theory toward environmental concerns. It is informed by the premise that, in our present Anthropocenic age defined by humans acting as a geophysical force, human bodies, cultural technologies, and the earth are intersecting material practices. I argue this intersectionality is neither cyborgian nor posthuman, as some media scholars insist, but is something far more natural: it is a metabolic relationship wherein each system is inherently implicated in the perpetuation of the others. Through a series of chapters that dispense with standard maps of cyberspace and the social network replacing them with a digital geography of wires, workers, warehouses, and waste, this project shifts the media theoretical focus from one grounded in computation to one fully rooted in the earth. Unlike others, like those mentioned here within, who are contributing to what may be called an emerging environmental media studies, I offer several practical and theoretical interventions, including Permaculture and Ecocritical Digital Humanities, that are capable of moving us toward more sustainable digital practice and a more robust Anthropocene Humanities.