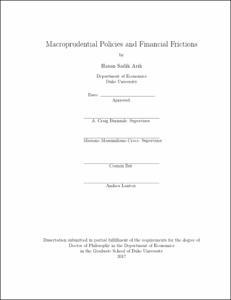 This dissertation consists of two essays on macropudential policies and financial frictions. In the first essay, the Reserve Option Mechanism, an unconventional policy tool invented and used by the Central Bank of the Republic of Turkey, is modeled and evaluated. The mechanism is designed to act as an automatic stabilizer of large fluctuations of exchange rate by letting banks use foreign currency to fulfill a portion of the domestic-denominated required reserves. Hence, the fluctuations in domestic business cycles due to volatile short-term capital flows are expected to be mitigated. The mechanism works through easing the frictions faced in the financial sector by generating a certain level of ``confidence" for the banks in terms of having enough foreign funding as reserves. Banks utilize the mechanism up to a point where this benefit is offset by the cost of using the mechanism: the Reserve Option Coefficient, which is the amount of foreign currency that must be held to meet one-unit domestic-denominated reserve requirement, i.e., an artificially imposed ``exchange rate". Two channels through which the mechanism is utilized are identified: a) the funding spread banks face between the foreign and domestic funding rates, and b) depreciation channel which involves the valuation of already-held foreign reserves through the mechanism.

In the second essay, I present a dynamic stochastic general equilibrium model that can be used to evaluate macroprudential policies. In the model, both the financial intermediaries and the non-financial firms face financial frictions and make separate financial decisions. After showing the model's relative ability to replicate events like the Great Recession compared to natural benchmark models, I document that financial shocks were relatively more important than productivity shocks in the period of the Great Recession. Then, I evaluate a countercyclical capital policy that can help mitigate both financial and productivity shocks. The policy involves injection of additional capital to the banks during bad times, which reduces the frictions banks face; as a result, it is welfare-improving.