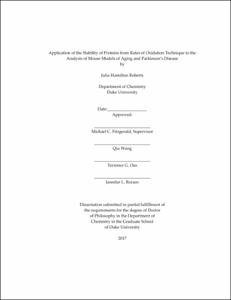 Recently, several mass spectrometry-based proteomics techniques have been developed for the large-scale analysis of thermodynamic measurements of protein stability. This has created the possibility of characterizing disease states via differential thermodynamic stability profiles. Described here is the application of the Stability of Proteins from Rates of Oxidation (SPROX) technique to characterize mouse models of disease. The mouse models studied here are of normal aging and two genetically induced Parkinson’s Disease (PD) models.

Thermodynamic stability profiles were generated for 809 proteins in brain cell lysates from C57BL/6 mice at age 6- (n=7) and 18-months (n=9). The biological variability of the protein stability measurements was low, and within the experimental error of the SPROX technique. Remarkably, the large majority of the 83 brain protein hits were destabilized in the old mice, and the hits were enriched in proteins that have slow turnover rates (p<0.07). Furthermore, 70% of the hits have been previously linked to aging or age-related disease.

One of the PD mouse models involved characterizing the protein interactions induced by mutated leuceine-rich repeat kinase 2 (LRRK2) at a pre-symptomatic time point (3 months old). The models used were a control, overexpressed wildtype LRRK2, and overexpressed R1441G mutated LRRK2 (n=2 for all models). Comparative analyses on thermodynamic stability profiles of ~470 proteins revealed relatively few differences. In fact, the observed hit rate in each comparative analysis was close to that associated with the biological variability of the mice. However, four protein hits, dihydropyrimidinase-related protein 2, eukaryotic translation initiation factor 4A2, Rap1 GTP-GDP dissociation stimulator 1 and myelin basic protein, were identified with consistent thermodynamic stability in multiple mice within a biological state and as hits in multiple comparisons suggesting they are the most likely to be true positives.

The results of this thesis help validate the use of thermodynamic stability measurements to capture disease-related proteomic differences in mice. Furthermore, these results establish a new biophysical link between the hit proteins identified and their role in aging, LRRK2 protein interactions, and PD progression.