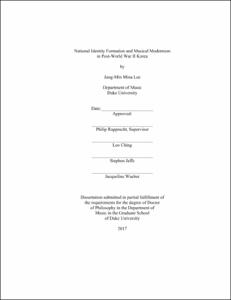 During the post-World War II decades (circa 1945 to circa 1980), the expression of a collective national identity was a primary concern in South Korea. The central question of my dissertation is how the awareness of a national identity, which preoccupied the public discourse in Korea during its post-WWII cultural rebuilding, was manifested in the musical works and careers of Korean composers who engaged with modern art music of the West. In exploring this question, my dissertation presents a cultural history of the translation of twentieth-century European musical modernism into the Korean musical scene; the postcolonial national identity formation remains a central theme. I investigate five Korean composers whose lives and works embody the country’s process of modernization and westernization: Isang Yun (1917–1995), Nam June Paik (1932–2006), Sukhi Kang (b. 1934), Byung-dong Paik (b. 1936), and Unsuk Chin (b. 1961). These composers were the proponents of Western musical modernism; their musical styles varied from the theoretical rigor of the 1950s and the 1960s to the radicalism of the Fluxus movement to the incorporation of technology. Each composer has understood and utilized contemporary European musical practices in a highly individualized manner but with a common consciousness of national identity.

My research employs close readings of scores by these composers and archival research conducted in Germany, Korea, and the US; musical and historical analyses are framed by cultural theories of postcolonialism, globalization, and nationalism. Unveiling the convoluted and multifaceted evolution of national identities, I reveal that there is a general progression from an overt emphasis on national identity toward more individual and universalist approaches to music across the three generations of Korean composers. This study contributes to the growing musicological efforts to place works by East Asian composers in the larger history of Western art music. The composers investigated here have not been treated in depth in Anglophone musicology, and I see my research as one of the first initiatives in including Korean composers in the discussion of modern Western art music. More than just introducing their music, my study also encourages nuanced readings of the works by these composers, beyond the familiar framework of the East-West binary.