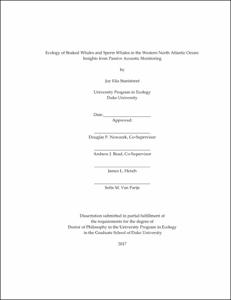 Beaked whales (family Ziphiidae) and sperm whales (Physeter macrocephalus) are apex marine predators found throughout the world’s deep oceans. These species are challenging to observe, and little is known about fundamental aspects of their ecology, including their spatiotemporal distributions and habitat use. Passive acoustic monitoring (PAM), can be used to detect their echolocation clicks during foraging dives, thereby providing an indication of species presence. My dissertation investigates the distribution, seasonal occurrence, and diel variability in acoustic detections of beaked whales and sperm whales in the western North Atlantic Ocean, using multi-year passive acoustic recordings collected along the continental slope between Florida and Nova Scotia. First, I describe spatiotemporal patterns in detections of beaked whale echolocation clicks from five beaked whale species and one signal type of unknown origin. At least two beaked whale click types were detected at each recording site, and detections occurred year-round, with site-specific variation in relative species occurrence. Notably, Cuvier’s beaked whales (Ziphius cavirostris) were regularly detected in a region where they have not been commonly observed, and potential habitat partitioning among Cuvier’s and Gervais’ (Mesoplodon europaeus) beaked whales was apparent within their overlapping ranges. To examine the potential effects of using duty-cycled recording schedules on the detection of beaked whale clicks, I performed a subsampling experiment, and found that short, frequent listening periods were most effective for assessing daily presence of beaked whales. Furthermore, subsampling at low duty cycles led to consistently greater underestimation of Mesoplodon species than either Cuvier’s beaked whales or northern bottlenose whales (Hyperoodon ampullatus), leading to a potential bias in estimation of relative species occurrence. Next, I examine the occurrence of sperm whale echolocation clicks, which were recorded commonly between southern New England and North Carolina, but infrequently off the coast of Florida. In the northern half of the study region, I observed distinct seasonal patterns in the daily prevalence of sperm whale clicks, with a winter peak in occurrence off Cape Hatteras, North Carolina, followed by an increase later in the spring at sites further north, suggesting a shift in sperm whale concentrations which may relate to enhanced productivity occurring at higher latitudes in the spring. Finally, I explore the variability in daily detection rates of beaked whales and sperm whales in relation to dynamic oceanographic conditions off the Mid-Atlantic coast. Detection rates did not appear to correlate with temporal environmental variability, and persistent habitat features may be more important in predicting the occurrence of these species. Together, my dissertation provides substantial baseline information on the spatiotemporal occurrence of beaked and sperm whales in the western North Atlantic Ocean, highlighting the diversity within this guild of deep-diving odontocetes and demonstrating the use of PAM to provide species-specific insight into their ecology.