Teacher Decision-Making about Student Mental Health: The Role of Race and Gender 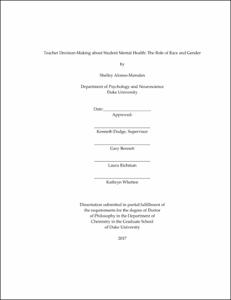 Mental health issues are prevalent in childhood, but the majority of problems go untreated. Black children and girls are less likely than their White male peers to receive mental health treatment when needed. As a primary gatekeeper, teachers may be partially responsible for these disparities. The goal of the current study was to measure implicit race and gender bias at several steps in the decision-making process leading up to, and including, referral for services. Participants were 1,106 public middle school teachers in the state of North Carolina. Teachers were presented a series of vignettes that described complex behavior, including both internalizing and externalizing problems. Perceived child race and gender was manipulated via normed given names; vignettes were otherwise identical within each condition. Controlling for teacher demographics and randomized condition, vignettes with a male name were attributed more externalizing problems, rated marginally more severe, and more likely to be referred for academic and behavioral interventions than those with female names. Vignettes with Black names were less likely to be referred for mental health treatment and marginally more likely to be referred for academic services. Results of this analysis suggest that implicit racial and gender bias may play an important role in teacher assessments of problematic child behavior and referral for services. Future research is needed to further explicate these processes and how they correlate with in vivo decision-making.