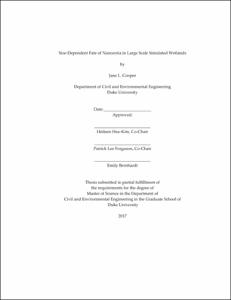 Nanoceria, or cerium (IV) oxide, is used widely in industry for its catalytic and physical properties, thus its release into the environment is eminent. The environmental risk of nanoceria is still unclear, but understanding its environmental fate could help to inform future studies. To understand its fate, large scale simulated wetlands were constructed and dosed weekly. Nanoceria of primary particle sizes ~4nm (sm-CeO2) and ~140nm (lg-CeO2) were dosed into these mesocosms, 750 mg total over nine months. Single particle ICP-MS (spICP-MS) was employed with microsecond dwell times (0.1ms) to understand particulate cerium in surface water. spICP-MS proved ineffective as a comparison tool between treatments, since sm-CeO2 was below instrument detection, and further data processing could not amend the issue. However, comparisons between nanoceria stocks and mesocosm samples could be conducted. Mesocosm water dosed with lg-CeO2 exhibited some aggregation of its smaller fraction.

At the end of 9-months, elemental analyses showed that nanoceria size did not affect the mass of cerium in surface water, as mesocosms treated with lg-CeO2 contained 4.0 ± 1.4 mg of Ce and sm-CeO2 treated waters contained 5.6± 6.7mg Ce. Greater biological uptake did occur when treated with smaller particles, as shown in elevated root concentration (sm-CeO2: 67 ± 14 ng g-1 ; lg-CeO2: 21 ± 10 ng g-1) and total Ce in Egeria densa biomass (sm-CeO2: 22 ± 1.4 ; lg-CeO2: 2.9 ± 0.5 mg). The environmental compartments in this study accounted for a small fraction of dosed nanoceria (< 5%), so assumed nanoceria fate is the sediment.