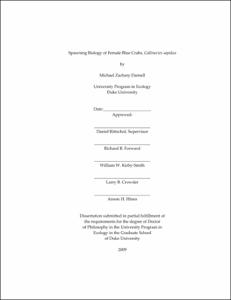 This dissertation investigated spawning biology of female blue crabs, <italic>Callinectes sapidus</italic>. Females mate following the terminal molt and undertake a spawning migration seaward, producing multiple clutches of larvae. To examine lifetime reproductive potential of female crabs, individual crabs were confined in the field from terminal molt to death. Crabs produced up to 7 clutches over 1-2 spawning seasons and survived up to 394 d after the terminal molt. Time to first clutch and time between clutches were positively correlated with carapace width and best described by degree-days. Size at maturity was negatively correlated with water temperature on the day of the terminal molt. Most measurements of clutch quality and larval fitness were similar for all clutches. The percentage of embryos developing normally decreased 40% from clutch 1 to clutch 4 and clutch volume decreased 50% from clutch 1 to clutch 5. Thus, most of a crab's reproductive output is from the first few clutches.

Endogenous rhythms in vertical swimming, a mechanism underlying migration in tidal estuaries, were examined in the laboratory under constant conditions in juvenile females, recently-molted females, and females with mature ovaries from Beaufort, NC. Rhythms were variable in each stage, though circatidal rhythms consistent with ebb tide transport were observed in juvenile females and recently-molted females. Crabs with mature ovaries typically swam around the time of high tide. Rhythms were also examined for ovigerous females collected from estuaries with three different tidal regimes: semi-diurnal, diurnal, and non-tidal. Crabs from the tidal estuaries had circatidal or circalunidian swimming rhythms with period lengths corresponding to the tidal period of their home estuary. Swimming occurred primarily on ebb tide. Crabs from the non-tidal estuary had a circadian rhythm of vertical swimming around the time of sunset. Such a rhythm has no obvious migratory significance and migration likely takes place though another mechanism.

Swimming behavior was also examined in the field in one non-tidal site and three tidal sites. Crabs were tethered in the field and swimming was monitored using archival pressure tags. Crabs tethered in the non-tidal site did not swim, possibly due to the lack of necessary environmental cues. Crabs at the tidal sites swam primarily on ebb tides. Swimming was greatest at the deepest site, which also had the strongest currents. This site is known to be a migratory area for spawning blue crabs. Decreased swimming behavior was observed at the two shallower sites, including one site that is known to be habitat for all stages of blue crabs. These results indicate that swimming behavior is variable among different areas in a single estuary. In areas where swimming is reduced, crabs may continue migrating seaward by walking or may spend additional time in that area to forage. Within each site, peak swimming generally occurred during the time of the most rapid decrease in water level, suggesting that hydrostatic pressure may serve as a cue for swimming.

Mark-recapture studies were conducted in three rivers (North River, South River, Adams Creek) in eastern North Carolina, and recently-molted female crabs were tagged to ensure a relatively constant time since molting. Most crabs traveled relatively short distances and were recaptured before producing a clutch of eggs. Individuals that moved substantial distances typically moved down-estuary. The Adams Creek canal, connecting Adams Creek with the Newport River estuary, functioned as a migratory corridor, as crabs from both Adams Creek and South River migrated down the canal, presumably using ebb tide transport. Many of the crabs that migrated down the canal into the Newport River were recaptured while ovigerous. Results of this study support the hypothesis that rapid long-distance migratory movements do not begin until production of the first clutch of eggs, though some down-estuary movement takes place by prior to production of the first clutch of eggs.

Female blue crabs mate following the terminal molt and begin moving seaward soon thereafter by walking and swimming. Once the appropriate salinity (> 22 ppt) is reached, the first clutch of eggs is produced and migration rate rapidly increases. Blue crab spawning biology should be similar throughout the range of the species. After taking latitudinal temperature variation and other local variables into account, results presented here should be applicable not only to blue crabs in North Carolina, but in other areas as well.