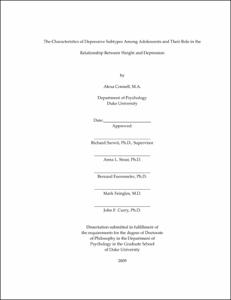 For several decades, researchers have sought to fully understand the nature of the relationship between depression and weight. To date, the research in this area has yielded highly inconsistent results, with some identifying null (Crumpton, Wine, & Groot, 1966; Moore, Stunkard, & Srole, 1962), positive (R. E. Roberts, Kaplan, Shema, & Strawbridge, 2000), negative (Silverstone, 1968; Simon, 1963) and gender specific relationships (DiPietro, Anda, Williamson, & Stunkard, 1992; Istvan, Savela, & Weidner, 1992; Onyike, Crum, Lee, Lyketsos, & Eaton, 2003). The author suggests that these inconsistencies can be explained by the use of measures of depression used which do not differentiate between various subtypes of depression associated with divergent somatic symptoms; including atypical depression (AD) and melancholic depression (MD). Adolescence may be an important intervention point to avert adult obesity and identification of subtypes may identify those at greatest risk. Yet, the characteristics of depression subtypes among adolescents are unknown. In order to identify subtypes of depression among adolescents that are differentially associated with weight, Latent Class Analysis (LCA) was conducted and resulting classes were tested for associations with weight. Six latent classes were identified. Four were uniquely associated with somatic symptoms including hyper- and hypophagia, suggesting that somatic symptoms play an important role in the distinction between depressive subtypes. Analyses showed an association with BMI for the 2 hyperphagic classes but not for the 2 hypophagic classes. The inclusion of depression class improved the fit of regression models for depression predicting BMI. This suggests that the inclusion of depression subtype in analyses may clarify the association between weight and depression.