'Dost Thou Speak like a King?': Enacting Tyranny on the Early English Stage 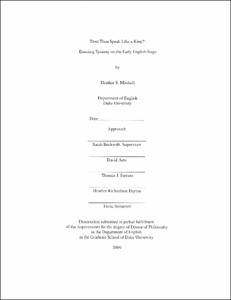 The Biblical drama that was popular in England from the fourteenth to sixteenth centuries is a fruitful site for exploring the dissemination of political discourse. Unlike Fürstenspiegeln (mirrors for princes literature) or the tradition of royal civic triumphs, Biblical drama, whether presented as ambitious "history of the world" civic cycles or as individual plays put on by traveling companies or parish actors, did not attempt to define or proscribe ideals of kingly behavior. On the contrary, the superstars of the early English stage were tyrants, such as Herod, Pharoah, Pilate, and Lucifer. These figures were dressed in the most lavish costumes, assigned the longest and most elaborate speeches, and often supplied the actors who brought them to life with a substantial wage. This dissertation argues that these tyrants helped to ensure the enduring popularity of Biblical drama well into the Tudor period; their immoderation invited authors, actors, and audiences to imagine how the role of a king ought to be played, and to participate in a discourse of virtue and self-governance that was applicable to monarchs and commoners alike.

This work builds upon a growing scholarly awareness of what Theresa Coletti and Gail McMurray Gibson have called "the Tudor origins of medieval drama": namely, that our modern knowledge of "medieval" plays reflects and relies upon the sixteenth-century context in which they were preserved in manuscripts and continued to flourish in performance. The popularity of the tyrant-figures in these plays throughout the Tudor period - particularly in parts of the country that were reluctant to adapt to the ever-changing economic, judicial, and religious policies of the regime - suggests an enduring frustration with royal power that claimed to rule in the name of "the common good" yet never hesitated to achieve national obedience at the expense of economic, judicial, and religious continuity. Through an examination of surviving play-texts from the Chester Mystery Cycle and Digby MS 133 as well as documentation of performances in Cheshire and East Anglia, this dissertation chronicles Biblical drama's ability to serve as an important site of popular resistance to the Tudor dynasty, both before and after Protestantism became a matter of state policy.

Chapter One considers the Crown's surprisingly active involvement in the civic government of Chester between 1495 and 1521 in counterpoint with the early sixteenth century restructuring of the city's mystery cycle, and argues that the cycle's new opening pageant, The Fall of Lucifer, embodies Chester's fears about losing its traditional civic identity. Chapter Two examines Biblical drama's surprising ability to encourage resistance to tyranny through a reading of The Killing of the Children, which highlights the fleeting and unprofitable nature of earthly power in such a way as to resonate with audiences in the wake of Henry VIII's initial religious reforms of 1536. Chapter Three explores the capacious Mary Magdalen play, which addresses issues of succession, of national religious identity, and of female rule in ways that seem prescient of the controversial crowning of Henry VIII's eldest daughter in 1553. Chapter Four discusses the aftermath of the final performance of the Chester cycle in 1575: the city's mayor was accused of being no less of a tyrant than Herod himself for encouraging performance of a cycle seen by the Crown as "popish idolatry." The project concludes with a Shakespearean envoi: a consideration of Richard III that demonstrates that questions of tyranny and rightful governance remained as important at the end of the Tudor period as they were at the accession of Elizabeth's grandfather in 1485.