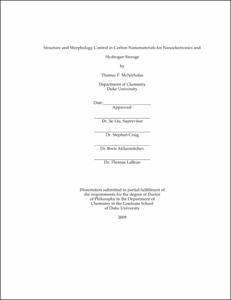 Although extremely useful in a variety of technologies, carbon nanotubes have proven impractical for use in H2 storage applications. As such, microporous carbons have been heavily investigated for such ends. Microporous carbons have distinguished themselves as excellent candidates for H2 storage media. They are lightweight and have a net-capacity of almost 100%, meaning that nearly all of the H2 stored in these materials is easily recoverable for use in devices. However, developing a microporous carbon with the appropriately small pore diameters (~1nm), large pore volumes (>1cm<super>3</super>) and large surface areas (&#8805;3000m<super>2</super>/g) has proven exceedingly difficult. Furthermore, maintaining the ideal graphitic pore structure has also been an unresolved issue in many production means. Several microporous carbon synthesis methods were investigated herein, including inorganic and organically templated production schemes. Ultimately, thermally treating poly (etherether ketone) in CO2 and steam environments was found to produce large surface area porous carbons (&#8805;3000m<super>2</super>/g) with the appropriately small pore diameters (<3nm) and large pore volumes (>1cm<super>3</super>) necessary for optimized storage of H2. Furthermore, the surface chemistry of these pores was found to be graphitic. As a result of these ideal conditions, these porous carbons were found to store ~5.8wt.% H2 at 77K and 40bar. This represents one of the most promising materials presently under investigation by the United States Department of Energy H2 Sorption Center of Excellence.

The success of both of these materials demonstrates the diversity and promise of carbon nanomaterials. It is hoped that these materials will be further developed and will continue to revolutionize a variety of vital technologies.