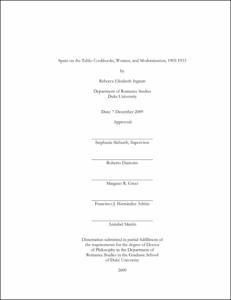 What does it mean in Spain to talk about national cuisine? This dissertation examines how three of Spain's most prominent intellectuals of the early twentieth century&mdash;Emilia Pardo Bazán, Carmen de Burgos, and Gregorio Marañón&mdash;confronted that question in their writing in cookbooks at a pivotal moment in Spain's history. Pardo Bazán, a feminist writer and novelist, authored two cookbooks, <italic>La cocina española antigua</italic> (1913) and <italic>La cocina española moderna</italic> (1914). Burgos, a teacher, newspaper columnist, and novelist, authored <italic>La cocina moderna</italic> (1906), <italic>¿Quiere usted comer bien?</italic> (1916), and <italic>Nueva cocina práctica</italic> (1925). Marañón, a physician and statesman as well as a writer, penned the prologue to Basque chef and restaurant-owner Nicolasa Pradera's 1933 cookbook <italic>La cocina de Nicolasa</italic>. These authors were active during a period that saw enormous changes in Spain's political structure and demographics, and in social and gender roles, and each of them engaged with the debates about Spain and the modern nation that consumed intellectual thinkers of the time. And yet each of these authors chose to write about cooking and food in a genre intended for the use of middle-class women in their homes.

Their writing in cookbooks, I posit, offered Pardo Bazán, Burgos, and Marañón the opportunity to address directly the middle-class female readers who stood at the nexus of their anxieties regarding Spain's modernization. These anxieties were generated by shifting social structures as women gained access to education and to paid employment outside of the home, and as a newly mobilizing working class threatened the social order through political and labor organization, as well as with violence and unrest. By teasing out the contradictions in their cookbook prologues, I show how these intellectuals use Spanish cuisine to promote a vision of Spain's modernization that corrects for the instabilities generated by those same modernization processes.

In Chapter One, I demonstrate how Pardo Bazán uses Spain's <italic>cocina antigua</italic>, catalogued in <italic>La cocina española antigua</italic> (1913), to "write the nation into existence" (Labanyi). By positioning cooking and cuisine in parallel to the dominant masculine nation-building discourses of the period, Pardo Bazán maps a role for her women readers, and for herself as a woman writer, in the task of building a modern Spanish nation. In Chapter Two, I focus on Pardo Bazán's second cookbook, <italic>La cocina española moderna</italic> (1914), and show how she uses Spain's modern cuisine to inculcate her female readers with the middle-class values that she believes will serve as a bulwark against the increasing unrest of the working class. In contrast to Pardo Bazán, who designates a conventional role for middle-class women in return for protection against the working class, Carmen de Burgos argues that there is no contradiction between women's domestic roles and having a public role and an intellectual life. Chapter Three analyzes how she uses a strategy of "double writing" (Zubiaurre) to show the importance of cuisine to the public sphere and to criticize the still extant obstacles to women's public activity. Chapter Four focuses on Gregorio Marañón's construction of Basque chef and restaurateur Nicolasa Pradera in his prologue to her cookbook. Marañón uses the prologue to promote a palatable version of Spain and its modernity to outsiders. Yet his version of Spain's modernity depends on reinscribing figures like Pradera into traditional, anti-modern gender and class roles.

At a moment in which the international media identify in Spanish cuisine "the new source of Europe's most exciting wine and food" (Lubow 1), this project historicizes the notion of "Spanish cuisine" at the center of Spanish haute cuisine. It also represents a foundational study in food cultural studies in Spain, offering a critical examination of cookbooks as a genre and as crucial texts in the <italic>oeuvres</italic> of Emilia Pardo Bazán, Carmen de Burgos, and Gregorio Marañón.