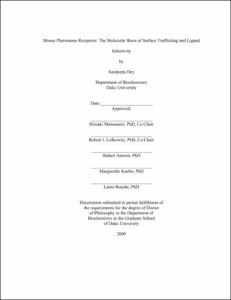 Pheromones are chemicals from conspecifics that affect innate behavior or hormonal changes. In mammals, the vomeronasal organ (VNO) is thought to play a prominent role in detecting pheromones; the vomeronasal sensory neurons (VSNs) express three families of seven-transmembrane G-protein coupled receptors (GPCRs): the V1Rs, V2Rs, and FPRs, in two molecularly and spatially-distinct regions. In mice, VSNs that express the V2Rs are thought to detect peptide cues, including MHC-presenting peptides, major urinary proteins (MUPs), and exocrine gland-secreting peptides (ESPs). They are thought to be involved in various pheromone-mediated behaviors and physiological changes, such as mating, aggression, and selective pregnancy block. In order to understand how pheromones are detected by the vomeronasal receptors, it is essential to know which receptors are activated by a given chemical. However, identifying cognate ligands for the V2Rs has been challenging, partly because they are poorly localized to the surface of heterologous cells. Here, we show that the calreticulin chaperone family members play a crucial role in trafficking V2Rs. A calreticulin homologue, calreticulin4 is specifically expressed in the VNO, while calreticulin expression level is low. Depleting calreticulin expression in HEK293T cells allows V2Rs to be trafficked to the cell surface, whereas expression of calreticulin4 does not block the trafficking of the V2Rs. Using this knowledge, we have established a heterologous cell system to functionally identify the V2Rs and demonstrate that the ESP family members can differentially activate the V2Rs. We also show the large extracellular domain of the V2Rs plays a crucial role in ligand selectivity. Our results provide a platform to characterize ligand selectivity of the V2Rs and suggest that a unique mechanism involving calreticulins regulates the functional expression of the V2Rs.