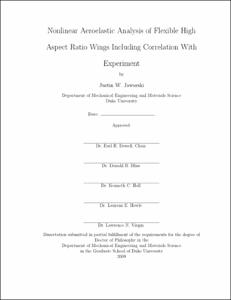 A series of aeroelastic analyses is performed for a flexible high-aspect-ratio wing representative of a high altitude long endurance (HALE) aircraft. Such aircraft are susceptible to dynamic instabilities such as flutter, which can lead to large amplitude limit cycle oscillations. These structural motions are modeled by a representative linear typical section model and by Hodges-Dowell beam theory, which includes leading-order nonlinear elastic coupling. Aerodynamic forces are represented by the ONERA dynamic stall model with its coefficients calibrated to CFD data versus wind tunnel test data. Time marching computations of the coupled nonlinear beam and ONERA system highlight a number of features relevant to the aeroelastic response of HALE aircraft, including the influence of a tip store, the sensitivity of the flutter boundary and limit cycle oscillations to aerodynamic CFD or test data, and the roles of structural nonlinearity and nonlinear aerodynamic stall in the dynamic stability of high-aspect-ratio wings.