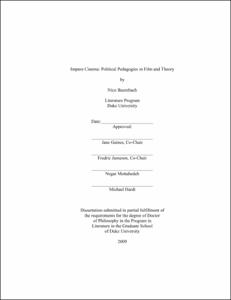 Impure Cinema: Political Pedagogies in Film and Theory asks what are the ways that the politics of film theory have been conceptualized since the era now known as "70s film theory." In particular, it analyzes the writings on cinema, politics and art by contemporary French philosophers Alain Badiou and Jacques Rancière in relation to the influential approaches of Louis Althusser and Gilles Deleuze and to theories of documentary cinema. I argue that unlike the political modernism of 70s film theory and the post-theory turn of 90s film studies, Badiou and Rancière offer an approach to film theory that neither assumes that all films are political, nor that politics underdetermine theory, but rather suggests that we analyze both theories and films in terms of how they construct connections between cinema and politics. Following Deleuze, I call these connections "pedagogical" not because they transmit knowledge but because they always involve a new kind of connection or relation that seeks to transform habitual ways of seeing, saying or doing. For Badiou and Rancière this is based on a conception of cinema as "impure." Cinema, they argue, is never free of elements from other arts or daily life, but it is this impurity that is the grounds for linking its artistic and political possibilities. I look at various film forms that highlight cinema's impurity, in particular the "actuality" and how it has been reappropriated in various forms of documentary and essayistic practices as a way of giving cinematic form to questions of political equality.