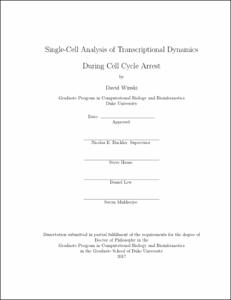 In the past decade, a challenge to the canonical model of cell cycle transcriptional control has been posed by a series of high-throughput gene expression studies in budding yeast. Using genetic methods to inhibit or lock the activity of the cyclin-CDK/APC oscillator, these population studies demonstrated that a significant proportion of cell cycle transcription persists in the absence of cyclin-CDK/APC oscillations. To account for these findings, a network of serially activating transcription factors with sources of negative feedback from transcriptional repressors (referred to as a \say{TF network}) was proposed to drive cyclin-CDK/APC independent gene expression.