Investigating the Genetic, Evolutionary, and Functional Mechanisms of Adaptations to Copper Mine Tailings in Mimulus guttatus 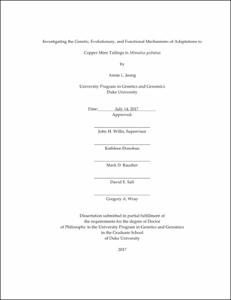 The evolution of copper tolerance in the common yellow monkeyflower, Mimulus guttatus, is a classic example of rapid adaptation in plants; however, little is yet known about the genetic, functional, and evolutionary mechanisms involved. How does excess copper cause toxicity in M. guttatus, and how do tolerant plants avoid negative effects? What genes are involved in adaptations to copper mine tailings? How do they contribute to tolerance, and what do they teach us about how copper tolerance evolved? In my dissertation, I address these questions to gain a better understanding of this rapid local adaptation.

To better understand how copper affects M. guttatus, we used RNA-seq to find genes that are differentially expressed between hydroponically-grown tolerant and nontolerant lines of M. guttatus in excess copper. In addition, we used F1 hybrids to examine allele specific expression of candidate genes. We found that copper causes more differential gene expression and greater oxidative stress in the nontolerant genotype than in the tolerant genotype. Additionally, comparisons of differentially expressed genes between genotypes revealed that more genes are constitutively expressed than induced. We identified possible candidate genes and found that most of them are cis-regulated, while genes that were systemic or downstream responses to excess copper are more likely to be trans-regulated. Together, these patterns suggested that the tolerant genotype avoids oxidative stress by either excluding, sequestering, or pumping out copper ions from the cells.

To identify loci that contribute to adaptations to copper mine tailings, we looked for regions that directly contribute to survival in copper-contaminated soil. We first characterized two parental inbred lines to determine whether copy number and gene expression differences of candidate genes are consistent with previous results. We then mapped differential survival of F2s to find loci that correlated with survival and determine their effects on fitness. We compared a list of candidate genes to our results to see if any co-localized with survival. We looked for interactions between loci and tested how these genes contribute to copper tolerance. At least two loci on Scaffolds 4 and 9 contributed to survival on copper soil. Multi-copper oxidase (MCO) and copper ion ATPase transporter (COP) both co-localized with these loci and had large effects on fitness. The MCO locus was required and sufficient for survival, while the COP locus acted additively with MCO. We hypothesized that the causal gene at the MCO region was selected for first in the evolution of copper tolerance, and that these two genes work together to exclude Cu+ ions from the cell. Together, our findings improved our understanding of the genetic, functional, and evolutionary mechanisms of copper tolerance in M. guttatus and provide evidence for at least two genes that are involved in this common adaptation.