Negotiating Ocean Territory in Bermuda and the Sargasso Sea 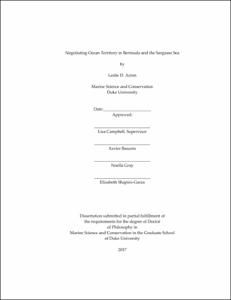 To address growing concerns about global oceans health, state and non-state actors have pushed for the establishment of large marine protected areas (LMPAs) in national exclusive economic zones (EEZs) and on the high seas. This push has resulted in a rapid proliferation of LPMAs in recent years, despite limited understanding of their social and political attributes and implications. This dissertation contributes to growing social science scholarship on LMPAs by employing a qualitative, multi-sited case study investigating negotiations over two proposed, overlapping LMPAs in Bermuda’s EEZ and the Sargasso Sea. It engages with human geography theory on territoriality to examine the territorial practices emerging through LMPA proposals and how negotiations over these ‘scaled-up’ management tools are contributing to transformations in global oceans governance. Specifically, it addresses three research questions: (1) What territorial practices do actors use in negotiations over LMPAs? (2) How do these territorial practices produce ocean space? (3) What do these territorial practices reveal about these ocean spaces and human-ocean relations?

To answer these questions, this dissertation traces negotiations over these two proposed LMPAs across space, actors, jurisdictional scale, and time, to study sites including Bermuda, Washington, DC, London, and the 2014 World Parks Congress in Sydney, Australia. Results demonstrate that actors used diverse territorial practices, such as map-making and the promotion of territorial narratives, to negotiate for particular governance outcomes. Some of these territorial practices served to ‘fix’ ocean spaces, belying their continuously emergent material and social realities. Others contributed to altering ocean space despite the absence of any formal regulatory change. Further, analysis revealed that the territorial practices employed during these two distinct, but related LMPA negotiations interacted, producing an unexpected territorial outcome in the Sargasso Sea.

Overall, this dissertation contributes to increasing scholarship in human geography on the emerging territorial processes transforming global oceans governance and, more broadly, human relations with offshore ocean spaces. It presents an empirical study that advances understanding of LMPA negotiations and reveals more diverse interests in and relations to these offshore spaces than traditional conceptualizations suggest. Results from this dissertation could inform ongoing and future LMPA proposals and negotiations through attention to the limits/possibilities produced and revealed by actors’ territorial practices.