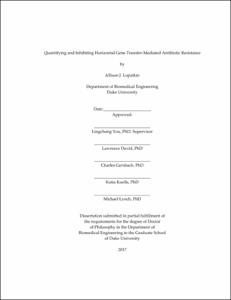 Antibiotic discovery and widespread usage has revolutionized the treatment of infectious diseases. However, this golden age of modern-day medicine is threatened by the increasing prevalence of antibiotic-resistant pathogens. As the antibiotic development pipeline increasingly slows, we find ourselves falling behind in the race between innovation and evolution.

Among the various means of bacterial evolution, horizontal gene transfer (HGT) – or the non-genealogical transmission of DNA between organisms – is the dominant mode responsible for the acquisition of antibiotic resistance genes. Combined with antibiotic overuse and misuse, HGT primarily via conjugation, has compromised the efficacy of nearly every single antimicrobial available. Tight coupling between HGT and antibiotic-mediated selection, along with a lack of quantitative experiments, has led to the general belief that antibiotics themselves promote gene transfer; however, antibiotic action could modulate the rate of gene transfer (as is assumed), the resulting population dynamics, or both. Therefore, it is critical to decouple these two processes to definitively determine the influence of antibiotics on conjugation.

I next investigated the potential strategies to minimize, or ideally reverse, plasmid-mediated resistance. Traditionally, reducing overall antibiotic use has been the primary approach to reversing resistance; minimizing selection takes advantage of costly resistance genes to competitively displace resistant bacteria with their sensitive counterparts. However, despite widespread antibiotic stewardship initiatives, even costly resistance persists for long periods of time. One potential explanation is that sufficiently fast conjugation enables plasmid persistence in the absence of selection. Similar challenges in quantifying conjugation have prevented general conclusions, and overall, the extent to which conjugation enables persistence is unknown.

Using the same platform, I showed that conjugation enables the persistence of costly plasmids, even in the absence of selection. Conjugation-assisted persistence was true for nine common conjugal plasmids, and in microbial populations consisting of varying degrees of complexity. Finally, I showed that by reducing the conjugation efficiency and promoting plasmid loss, it is possible to reverse resistance. Together, these findings contribute to basic understanding of the propagation and persistence plasmids, and elucidate a novel therapeutic strategy by taking advantage of ecological/evolutionary dynamics to to reduce or even reverse the spread of resistance.