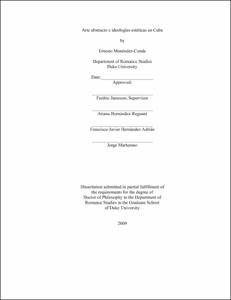 <bold>This dissertation deals with Cuban art criticism and other written texts related to Abstract Art. From a critical perspective that relates art to society and political and institutional practices, all of the above texts are interpreted as bearers of aesthetic ideologies, which are expressed in the paradigms from which Art Criticism attempted to validate Abstraction. This study further demonstrates that the dominant discourses in the realm of Art Criticism are strongly related to Ideological State Apparatuses. Art Criticism not only mediates between the artwork and the spectator, but also between artistic acts of provocation and the establishment.

Abstraction in Cuba constituted an important axis in the polemic between autonomous art and socially committed art, but the debates themselves were subsumed in ideological and even political battlefields. Art Criticism oriented these debates, by emphasizing certain problems, and diminishing the importance of other ones.

This dissertation is organized in function of the dominant questions that Cuban Art Criticism addressed. The first chapter accordingly deals with definitions of abstract art that were prevalent in art writing and publications from 1948 to 1957, a period in which Art Criticism is mostly concerned with the autonomy of art. The second chapter follows the debates about the social commitment of abstract art, which became predominant during the first years of a Marxist-oriented Revolution. This polemic is implicit in the emergence of an Anti-Academic movement in the visual arts, and it began to lose its strength once the Cuban Avant-Garde started to gain institutional recognition. After being relegated to a peripheral position, the question concerning the social commitment of Abstract Art became crucial after the triumph of the Revolution. The final chapter deals with the relations between Abstract Art and the diverse documents that embodied and defined the Cultural Policy during the Cuban Revolution.

Throughout, this study strives to establish the place of Abstract Art in the Institutional, and discursive practices from 1959 onwards. This place is defined by its instability, as it is constituted through intermittencies and steps backwards on the path towards the institutional consecration of non-figurative tendencies. </bold>