Nourishing Networks: The Public Culture of Food in Nineteenth-Century America 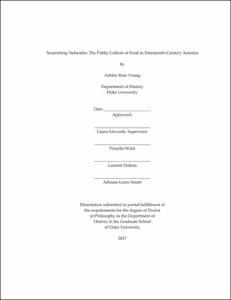 “Nourishing Networks: The Public Culture of Food in Nineteenth-Century America” examines how daily practices of food production and distribution shaped the development of New Orleans’ public culture in the long nineteenth century, from the colonial era through the mid-twentieth century. During this period, New Orleans’ vendors labored in the streets of diverse neighborhoods where they did more than sell a vital commodity. As “Nourishing Networks” demonstrates, the food economy provided the disenfranchised—people of color, women, and recent migrants—a means to connect themselves to the public culture of the city, despite legal prohibitions intended to keep them on the margins. Those who were legally marginalized exercised considerable influence over the city’s public culture, shaping both economic and social interactions among urban residents in the public sphere. To the vexation of some elites, these vendors helped determine what New Orleanians ate, how much it cost, and how they ate it. More than that, they shaped the cultural meanings of food. Exploring key sites of public culture including the municipal markets and their surrounding streets, the dissertation situates New Orleans’ local food culture within broader changes like slavery and abolition at the national and even international level—a perspective that places the city’s vendors at the center of a much larger transformation in Americans’ relationship to food, which was always about much more than sustenance. In fact, food became a mode through which disenfranchised Americans participated in the political culture: those without the vote claimed a voice through their role in the country’s food culture and economy.