Faith with Doubt: American Muslims, Secularity, and the “Crisis of Faith” 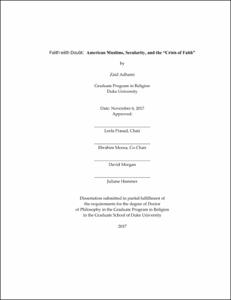 This dissertation explores the phenomenon of “religious doubt”, which has emerged in recent years as a pervasive concern in American Muslim communities and discourses. The dissertation takes a two-pronged approach: an analysis of American Muslim public discourses, and an ethnographic analysis of Muslims in Boston. Firstly, I analyze how the growing sense of a “crisis of faith”—and a framing of people’s ambivalence, uncertainty, and doctrinal dissent as a problem of “doubt”—can be traced to the convergence of American secularity and Muslim discursive constructions of “faith”. Secondly, through the narratives, reflections, and exchanges of my ethnographic interlocutors, I examine how faith and doubt are experienced and navigated by individuals. Through my attention to lived experience, I argue that there is a far more ambiguous relationship than has been generally assumed between two distinct senses or dimensions of “faith”: on the one hand, people’s mental conviction in authoritative doctrines; and on the other hand, a more general sense of religious commitment, as a moral-devotional relationship and aspiration. Standard assumptions about religion typically operate with a deeply intellectualist and reified model of religion that presumes a thoroughly heteronomous subject. Such models assume a linear movement in religious subjects, from mental conviction in the foundational claims of a religion, to assent in the myriad doctrines and precepts presumably demanded by the religion, to a commitment to live faithfully in accordance with these doctrines and precepts. What my ethnography ultimately highlights, however, is that people live out their sense of faith in a far more complex and messy fashion, such that their moral and devotional commitments to Islam do not so neatly line up with doctrinal affirmation in the way these linear models of religion assume. Finally, I argue that what is central to people’s navigation of faith is personal experience and experiential knowledge, which serve as the inescapable prism through which conviction, judgment, knowledge, and commitment are shaped.